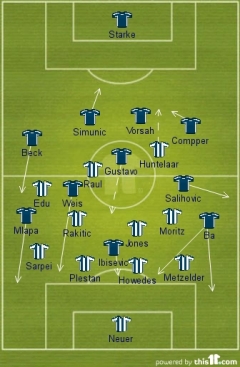 The first half formations

Just like they were during their maiden top-flight season in 2008/09, Hoffenheim are the division’s early pace-setters. After overcoming last year’s runners-up by a two-goal margin in this game, Ralf Rangnick’s team maintained Schalke’s point-free start.

Through a combination of luck and the away side’s profligacy, Hoffenheim rode a storm that lasted for the opening quarter of the match, before finally making some vicious weather of their own.

They were aided by the fact Schalke’s defence was as clumsy as their own. Christoph Metzelder had a wretched evening, lacking stamina, fight, awareness and speed.

Magath deployed him as a right-back in a bid to curtail the constantly side-switching direct wing threats of Peniel Mlapa and Demba Ba, but neither found it particularly troubling to evade the former Real Madrid defender. END_OF_DOCUMENT_TOKEN_TO_BE_REPLACED

Tobias Weis - an inspiration and whirlwind from RCM this season.

The league leaders host a side whose bid for the title is already looking splintered. Hoffenheim‘s 4-1-4-1, complete with rampaging right back Andreas Beck, blends defensive muscle, imagination, clever movement, and powerful dribblers. Decisive then narrow wins against Werder Bremen and St. Pauli respectively mark Hoffe as a team capable of clinching three points regardless of circumstance and adversary.

A Friday evening kick-off benefits Schalke as they begin their Champions League campaign against Lyon the following Tuesday. Nevertheless, recent form suggests they needn’t bother turning up to either game. The purchase of Klaas-Jan Huntelaar – he and Raul making a Real Madrid benchwarming Old Boys Club – won’t solve the creative paucity in midfield, or deficiencies in defence. END_OF_DOCUMENT_TOKEN_TO_BE_REPLACED