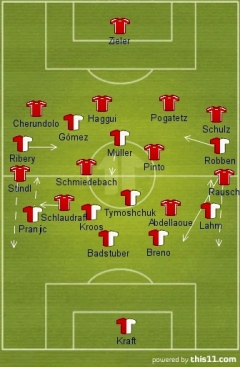 High-flying Hannover stunned an again off-colour Bayern Munich side and moved into second place in the Bundesliga table.

Both sides came into this game in nigh-on full strength condition. There were three key absentees, however – Bastian Schweinsteiger, who’d accumulated five yellow cards (although given his sketchy recent performances, some might argue he and the team needed a brief break from one another), Luis Gustavo, who had the sniffles, and for the hosts, top scorer Didier Ya Konan, sidelined with a knee injury.

Although Hannover started the game one place ahead of Bayern, you could argue the psychological advantage was with the Bavarians going on the last four results between the two sides: 5-1, 3-0, 7-0, and most recently, in October 2010, 3-0. The victories – 18-1 on aggregate – were all in Bayern’s favour. And, ominously, the 5-1 win that came in the March of 2009 was on the back of a midweek cup elimination for FC Hollywood – something Louis van Gaal’s side experienced on Wednesday when humiliated by Schalke at the Allianz Arena. END_OF_DOCUMENT_TOKEN_TO_BE_REPLACED 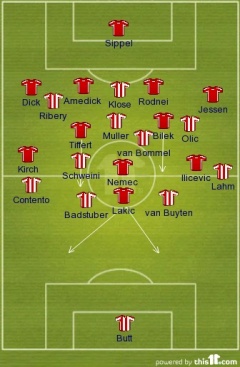