Odise Roshi settled a drab relegation six-pointer after coming off the bench to score with one of his first touches. At a frosty Fritz-Walter-Stadion, Kaiserslautern did most of the attacking in the first half, with Cologne more concerned about keepings things tight. But, several moments of stupidity by Ariel Borysiuk’s earned the young Pole a red card on his début shortly before half-time – a game-changing occurrence, as Cologne were firmly in the driving seat from then on. Although the visitors struggled to open up the ten-men of Kaiserslautern, who were content to sit back and play for a stalemate, the young Albanian speed-merchant made the crucial difference from a corner – which he won – in the 70th minute. This result lifts Cologne up to ninth in the table, six points above the relegation zone – the ‘highest’ team in which remain Kaiserslautern. 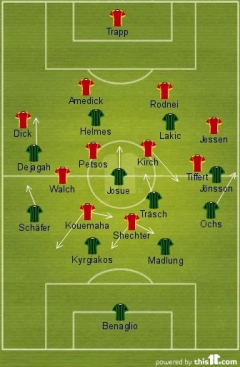 An incredible second half performance by substitute Mario Mandžukić saw ten man Wolfsburg defeat Kaiserslautern. Sotirios Kyrgiakos’ sending off at the end of an invention-free, chance-light and dire first half made the visitors favourites to snatch all three points in the second half, especially as Marco Kurz’s strikers showed much better movement in the opening 45 minutes than their Wolfsburg counterparts. But, Felix Magath’s inspired decision to unleash the Croatian from the bench changed the game, although it was Ashkan Dejagah who bagged the goal which lifts Wolfsburg up to 12th in the Bundesliga.

An open start to the match saw some nice football being played, with both sides looking to spread the ball about among the outfield players at a good tempo, before releasing either a full-back or forward on a dart into the final-third. The visitors barely pressed Wolfsburg when the centre-backs had the ball, instead content to sit off in their high and compact 4-4-2. This tactic frustrated the hosts in their attempts to make attacks, and resulted in Patrick Helmes and Srđan Lakić playing too far apart from one another in the opening five minutes.

When the home side did manage to play a ball into the final-third and then keep it there with the next pass, they pushed as many outfield players into and around the Kaiserslautern box as was possible.  END_OF_DOCUMENT_TOKEN_TO_BE_REPLACED

Kaiserslautern bettered their 2011/12 goals for tally by 150 per cent as they won their first game of the season against Mainz in the Rheinland-Pfalz derby. Mainz can’t stop conceding goals at the moment, and despite some positive and slice attacking play, couldn’t score enough goals to render their weaknesses at the back irrelevant. Kaiserslautern, though, played with a real energy and determination throughout, and hadn’t looked this sharp tactically all season. The result lifts Marco Kurz’s side out of the relegation zone (meaning that the ‘-burg’ teams, Frei-, Augs- and Ham- now occupy those places), and two positions behind 13th-placed Mainz.

Mainz, set up in a relatively flat-looking 4-4-2, instantly looked to get the ball down the channels, from where they could cross for their two box-bobbing strikers. As per usual, they pressed high and in numbers when out of possession, and even mixed things up with how they used the ball on the wings. For example, in the third minute, Zoltán Stieber halted his charge down the chalk, drew the Kaiserslautern midfield across and onto him, before slipping the ball in to Elkin Soto, who’d nipped into the gap left behind the hosts’ midfield and very deep defence.

Nevertheless, the visitors didn’t have it all their own way early on, as when Kaiserslautern got on the ball, they didn’t mess about, and either passed or ran it into or towards the final-third as hurriedly as possible. END_OF_DOCUMENT_TOKEN_TO_BE_REPLACED

The German top-flight’s lowest scorers take on a side who have shipped nine goals in their last three games tomorrow teatime, as the 2011/12 Bundesliga’s sixth fixture sees Mainz travel to second-bottom Kaiserslautern. After a firesale of attackers over the summer, Kaiserslautern coach Marco Kurz is under pressure already after watching his side scrape two barely deserved draws and lose three league games, scoring a mere two goals in the process. The Red Devils have conceded eight goals at the other end; two less than 12th-placed Mainz, who’ve netted seven times so far in the league. However, the latest visitors to Kaiserslautern have conceded eight goals alone in two of their last three games, after losing 4-0 at home to Hoffenheim last weekend, and throwing away a 2-0 half time lead against Schalke to lose 4-2 in the fixture before a 1-1 draw with Hannover. END_OF_DOCUMENT_TOKEN_TO_BE_REPLACED

Round three of the Bundesliga season sees two of the sides yet to register a win square up Saturday teatime. However, Kaiserslautern did at least manage to salvage a draw last weekend at home to unbeaten newbies Augsburg (following an opening day 2-0 defeat to Werder Bremen), whereas Ståle Solbakken has made a disastrous start to Bundesliga life as Cologne coach, losing 3-0 and 5-1 to Wolfsburg and Schalke respectively, and falling out with Lukas Podolski after stripping the temperamental talisman of the captain’s armband.

Despite constantly blaming himself for Cologne’s horror start to the 2011/12 campaign, the 43-year-old Norwegian will be hoping Saturday is the day when the squad finally clicks playing in his new system, and beat Kaiserslautern for the first time since December 2007’s 2. Bundesliga victory (as an aside, on the final day of that same season, Lautern beat Cologne 3-0 to save themselves from relegation to the third tier). END_OF_DOCUMENT_TOKEN_TO_BE_REPLACED

The general first half formations.

A combination of Christian Tiffert’s passing range and vision, fantastically bold tactics from Marco Kurz, and tired, uninterested and invention-free play from Stuttgart allowed Kaiserslautern to haul themselves nearer to mid-table safety at the expense of their hosts.

This clash pitted 15th against 14th; two sides just one point and two points above the relegation zone respectively. Whereas the hosts seemed to have recovered from a poor start to the season under new boss Bruno Labbadia, Kaiserslautern had had more off-days than on ones, and seemed more at ease playing against the big teams at their Fritz-Walter-Stadion ground than facing lesser teams on the road. But there were no major personnel paucity worries to deal with in preparation for this game, save for the absence of defender Jan Šimůnek and Srđan Lakić’s form in front of goal. The hosts, on the other hand, had to make do without Philipp Degen, Ciprian Marica and Johan Audel for this Saturday teatime clash. Pre-match, there had also been fitness doubts over playmaker Tamás Hajnal, and it turned out these weren’t mind games from the Stuttgart camp – the Hungarian wasn’t passed fit to play against his former side, who hadn’t won at the Mercedes-Benz Arena since 1999. END_OF_DOCUMENT_TOKEN_TO_BE_REPLACED

Kaiserslautern took a huge step to securing their Bundesliga place for next season at the expense of doomed-looking Borussia Mönchengladbach.

Both sides came into this game in precarious Bundesliga positions – the hosts placed bottom, but knowing a win would lift them up to 17th; while the visitors, level on points with three other sides, were only out of the drop zone on goal difference.  Among the goalscorers when Lautern beat Gladbach 3-0 in October was Srđan Lakić, the Croatian striker who had a phenomenal opening half to the season, but a player who has failed to score since securing a summer transfer to Wolfsburg in January – a convenient dry patch some Kaiserslautern fans argue, with the Wolves in just as much relegation trouble as Lakić’s current employers. Lakić was on the bench for this one, Marco Kurz sticking with the side which beat Freiburg 2-1 last weekend. Gladbach coach Lucien Favre persisted with his own goal-shy striker Mo Idrissou, looking to maintain momentum after snatching a draw at Werder Bremen last weekend. END_OF_DOCUMENT_TOKEN_TO_BE_REPLACED

Duisburg beat Kaiserslautern in the quarter-finals of the DFB-Pokal as Milan Šašić got one over his former employers. Goals from Branimir Bajić and Goran Šukalo in either half saw the second division side beat their top-flight visitors comfortably at the noisy Schauinsland-Reisen-Arena. They’ll now join fellow 2. Bundesliga side Energie Cottbus in the last-four of Germany’s premier cup competition.

Kaiserslautern came into the game on the back of a 5-1 defeat at the hands of an Arjen Robben-inspired Bayern. Duisburg were also eager to eliminate an iffy result out of their system – they drew 1-1 away at lowly Ingolstadt on the weekend.

Kaiserslautern took a while to line-up their back-four, all of whom seemed incapable of communicating to one another, making simple forward passes under minimal pressure, or gauging how close they were to their colleagues on either side, and goalkeeper Tobias Sippel. However, they were let off by the fact that The Zebras only managed to carve out one chance from Lautern’s blunders, and Stefan Maierhofer’s woeful finish illustrated why he failed to make the grade at either Wolves, Bristol City or Bayern. END_OF_DOCUMENT_TOKEN_TO_BE_REPLACED

Another pulsating weekend of football action in EU member states has been and gone, and all we can do is reflect and hope next Saturday and Sunday are just as action-packed.

I began my weekend with two successive 2-0 triumphs – Hoffenheim’s conquest of Schalke on Friday evening, followed by Zenit’s cruise to victory over the downwardly-hurtling Tom Tomsk.

Subsequent to that interjection of Russian action, I found myself back in the realms of the Bundesliga as Jurgen Klopp’s Borussia Dortmund sought to inflict a third successive defeat on Wolfsburg.

After an embarrassingly lacklustre first-half against Bayern Munich on the season’s opening day (during which Wolfsburg were allergic to the ball or their opponent’s half), positive tactics in the second half at last gave Wolfsburg some identity. END_OF_DOCUMENT_TOKEN_TO_BE_REPLACED