Tobias Weis - an inspiration and whirlwind from RCM this season.

The league leaders host a side whose bid for the title is already looking splintered. Hoffenheim‘s 4-1-4-1, complete with rampaging right back Andreas Beck, blends defensive muscle, imagination, clever movement, and powerful dribblers. Decisive then narrow wins against Werder Bremen and St. Pauli respectively mark Hoffe as a team capable of clinching three points regardless of circumstance and adversary.

A Friday evening kick-off benefits Schalke as they begin their Champions League campaign against Lyon the following Tuesday. Nevertheless, recent form suggests they needn’t bother turning up to either game. The purchase of Klaas-Jan Huntelaar – he and Raul making a Real Madrid benchwarming Old Boys Club – won’t solve the creative paucity in midfield, or deficiencies in defence.

Steve McLaren’s short time at the helm of Wolfsburg has been pretty miserable so far – two games, two losses, but one heck of a ride! The first – at Bayern Munich – was so nearly a draw thanks to Zvjezdan Misimović’s magic; the other involved losing 4-3 at home to Mainz with highly-touted centre back Simon Kjær having a nightmare. Bad egg Misimović has since departed, leaving new acquisition Diego to pull the strings.

Even if the Brazilian can feed one of the world’s best strikers in Edin Džeko, Mats Hummels and Neven Subotić appear impenetrable at present. Jurgen Klopp’s 4-2-3-1 consists of just one winger and a mobile forward line, but with Mario Götze tending to veer infield and thereafter feebly supporting right back Patrick Owomoyela, Wolfsburg left back Marcel Schäfer may get a number of attacking opportunities.

Despite looking ropey at the back, new Hamburg coach Armin Veh will happily hail the six points his side have slapped on the board so far. Ruud van Nistelrooy is in inspired form, although recalls to the Dutch national team could hinder his club form in due course. If the explosive Albert Bunjaku is at his waspish best, Heiko Westermann will have to renege his tendency to fall asleep on the pitch.

Another problem man for Hamburg might be set-piece specialist Mehmet Ekici. Nuremberg, often hindered by Dieter Hecking’s non-progressive tactics, must ensure that Jonathan Pitroipa isn’t able to isolate the defensively weak Javier Pinola. Der Altmeister lacked width in the loss to Freiburg, though this may serve to stifle Hamburg playmaker Zé Roberto. 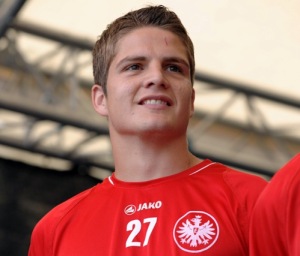 Round two saw Gladbach net six times, but Frankfurt conceded three silly goals as they lost at home to Hamburg. Delegations of responsibility, uncertainty over where to hold or position the defensive line, and Alexander Meier’s profligacy during a one-on-one opportunity saw an average Hamburg outfit coast to three points. Could the home side fill their boots once again in round three?

Frankfurt need points on the board, and they need them now. The strike partnership of Ioannis Amanatidis and Halil Altintop shows signs of promise, but although Dante dealt with Stefan Kießling superbly last weekend, centre back partner Roel Brouwers wasn’t so comfortable. Two of the Bundesliga’s hottest talents go head-to-head here – Marco Reus (an attacking midfielder in Gladbach’s  4-4-1-1), and Pirmin Schwegler (the sitting midfielder in a 4-1-4-1).

Stuttgart were very narrow against Dortmund last time out, which made for confused viewing. Christian Gross’s 4-4-2 mutated into a bizarre, lop-sided 3-4-3 on occasion, where the only player providing width was *left-back* Christian Molinaro. Thus, one imagines new signing Mauro Camaronesi will start on the right flank at das Dreisamstadion.

Freiburg won 2-1 at Nuremberg in round 2, atoning for an opening-day 3-1 loss to St. Pauli. Robin Dutt’s team took the game to Nuremberg, and if Jonathan Jäger can launch one of his menacing counter-attacks in the space abandoned by Molinaro (Jäger will be assisted in this by Mensur Mujdža, a vastly underrated attacking right back), Papiss Demba Cissé’s composure seems to be improving by the game.

To Felix Magath, the world’s greatest terror is ‘nover. Just five games stand between Hannover 96’s last derailing of the Schalke 04 locomotive and their latest one a fortnight ago- the 4-2 crushing in round 30 of 2009/10 being the first. Terra’nova’ means ‘new land’ in Latin, and two wins from two games indicates Mirko Slomka’s Die Roten team may have found some of their own.

After the multi-faceted disappointment that was last season, Hannover are doing everything right this time round. Exciting young Germans complement the outstandingly talented Norweigan striker Mohammed Abdellaoue. His movement off the ball has been superb this season, and if Leverkusen are as stodgy as they were in round two, an away victory wouldn’t be a surprise.

Merely three things are certain in life – death, taxes and the inconsistency of Werder Bremen. Thomas Schaaf has overseen two losses and three wins so far; goals flying in for and against his swashbuckling side. They journey down to a Bayern team passing with familiar panache, but harbouring the same defensive/Arjen Robben dilemmas.

Schaaf’s 4-3-2-1 floundered during round one’s 4-1 loss to Hoffenheim, yet a 4-3-1-2 – Pizarro operating behind the Marko’s, Arnautović and Marin – worked well against Cologne. Sebastian Boesnisch came in at left back, giving Bremen some much-needed width. The Pole will likely face Ivica Olić – 4-2-3-1 man Louis van Gaal preferring the hard-running Croat to the technically-superior Toni Kroos.

The first of two Sunday matches in the Bundesliga, and one that’s unlikely to poach viewers from the continent’s tastiest early-Sunday encounter, Juventus-Sampdoria. Tactically disciplined and high-octane Mainz have a bit of everything in their super fit XI, while Kaiserslautern will either have a post-Bayern-taming hangover, or some form of collective cloud nine mentality.

Mainz surprised many Bundesliga followers last season, and given the investment they’ve made since, a European spot isn’t unrealistic. This tie pits third against snd, and both have goal-greedy strikers – Morten Rasmussen, and Srđan Lakić respectively. My money’s on Mainz though – Thomas Tuchel’s front three are too canny and creative for Marco Kurz’s clumsy rearguard.

The round ends with its most unglamorous fixture. These two rugged 4-4-1-1 exponents last met in 2. Bundesliga on February 1, 2008. 1-1 was the end-result, and several players who featured in that match will do so here too; Youssef Mohamad, Kevin McKenna, Adil Chihi, Milivoje Novaković (all Cologne), and Fabian Boll and Carsten Rothenbach (St. Pauli) chief among them.

Zvonimir Soldo is under pressure at Cologne, as his side are joint bottom alongside Stuttgart. A Richard Sukuta-Pasu-inspired St. Pauli secured a late victory on their top flight return at Freiburg, before losing at home to Hoffenheim when Carsten Rothenbach failed to track Isaac Vorsah at a corner kick. Expect fiery challenges and one red card at the least at das Müngersdorfer Stadion on Sunday.

4 thoughts on “Bundesliga round three preview”