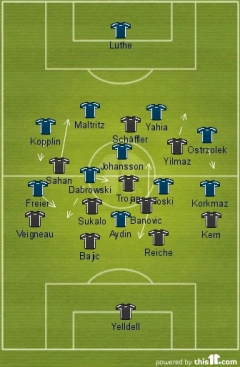 Bochum are just 180 minutes away from promotion to the Bundesliga after an accomplished performance against also-ran Duisburg.

This round 34 tie in 2. Bundesliga involved two sides with all still to play for. Bochum, two points ahead of fourth-placed Greuther Fürth, knew that a win here would earn them a place in the Bundesliga’s two-legged play-off against the top division’s third-worst side, Borussia Mönchengladbach. But if Bochum were to draw this home tie and Greuther Fürth won their home game against mid-table Fortuna Düsseldorf it would be the minnows who’d leapfrog Bochum into third spot due to a far superior goal difference. So ultimately, it was third-place or nothing for Friedhelm Funkel’s side, with Augsburg and Hertha BSC having already secured the league’s only two automatic promotion spots.

Duisburg, sat in sixth place at the start of the game (all the round 34 fixtures kicked off simultaneously), had nothing left to play for in the league. However, this tie came just seven days before their German cup final date with Schalke – not only a golden opportunity for Duisburg to land their first piece of silverware since 1978s Intertoto Cup triumph, but also a chance for the club to compete in next season’s Europa League. Thus, the onus was on coach Milan Šašić to keep his players motivated for this game.

Bochum, looking to make an immediate return to the Bundesliga, had to make do without defenders Matias Concha and Patrick Fabian, and midfielder Kevin Vogt. Nevertheless, Funkel has taken sides up five times in his career, and Bochum beat Duisburg 1-0 in front of more than 18,000 fans at the Schauinsland-Reisen-Arena back in December. Jong Tae-Se and Zlatko Dedič, who represented North Korea and Slovenia respectively at last summer’s World Cup, had to be content with spots on the bench. Duisburg, who will spend their fourth successive season in the second tier next year and were on course to finish sixth for the third season in a row, arrived at the rewirpower-stadion without Julian Koch, Ivica Grlić, Jürgen Säumel, Srđan Baljak and talismanic on-loan Wolves striker Stefan Maierhofer. With so much at stake, there wasn’t a spare seat to be found at the 29,500-seater stadium.

The hosts started with caution – sitting deep in a 4-1-4-1 as Duisburg tried to bulldozer their way through. They were eventually forced backwards, but Bochum didn’t make too much of an effort to press the ball back to the away side’s former Blackburn Rovers ‘keeper, David Yelldell. One of his restarts in the fourth minute hinted at his side’s attacking intent, throwing a catch from a tame Bochum free-kick three-quarters of the way up the pitch to launch Sefa Yılmaz on a break down the right.

But off-ball, it looked as though Duisburg were readying themselves for next weekend’s clash with Schalke. They barely pressed the pass-assessing, ball-holding centre backs as soon as Bochum got comfy in possession, sitting off in a deep 4-5-1. This allowed the home side to come forward, and in the eighth minute, they won a throw-in on the right-hand side, adjacent to the box. Björn Kopplin’s long dropper into the box was only nodded away into the shadow of the D, where Andreas Johansson didn’t have too break into much of a sweat to mop it up, steady himself, and flick a through-ball behind the static throng of black-shirted players to a colleague. And it was Mirkan Aydın who had the time and space to let the ball roll into a favourable position, before scooping it softly and accurately beyond the reach of Duisburg’s giant American ‘keeper for 1-0.

After the goal, Duisburg’s pace remained relatively non-existent, and the fluidity of the foremost six players in blue gave the Bochum centre-backs and Johansson a number of options to pick out with quick floor-based through-passes or long-diagonals. Nevertheless, the visitors showed that they have the ability to play a bit, breaking down one Bochum attack in the 15th minute and playing a series of short and sharp passes before releasing Yılmaz to cross, with the likes of Ivica Banović running head-down into the box, bolstering the away side’s options. On the end of that particular eventual cross was Manuel Schäffler, the lone striker, but his connection with the ball was somewhat half-hearted, perhaps influenced by the onrushing Andreas Luthe.

Although Duisburg were mainly camped out in their own half during the opening 45 minutes, they dealt with Bochum’s main attacking outlet – Kopplin’s long throw – very well. They had also begun to press the ball higher up the pitch, Yılmaz, in particular. As the 25-minute mark came and went, Duisburg had started to take the initiative. Knocking the ball about amongst their defenders, their attempts at drawing Bochum out and onto them failed, resulting in aimless punts upfield.

Long balls and fouls were pretty much the main themes of the first half, with both sides guilty. The former was disappointing to see given that both sides had deep midfielders looking to collect the ball and spray it about, and the latter ensured that the half was stop-start. Yet Duisburg fired a warning shot to both Bochum and Schalke on half time – another neat bit of short and sharp passing in the centre releasing Yılmaz to cross dangerously from the right. Trying to get on the end of it, Olcay Sahan snuck in behind the ball-watching Bochum defenders, but was fouled by Luthe/fell down too easily (the ref went with the latter opinion).

The formations with 70 minutes played, and the score 1-0.

The home side players no doubt came back onto their field in a positive mood, knowing that Greuther Fürth were still drawing 0-0. Nevertheless, they couldn’t focus on what was going on elsewhere (Greuther Fürth took the lead anyway, mere moments into the second half of their game), and Ümit Korkmaz’s early charge down the left indicated that although Bochum might now sit back a more, they’d still go all-out for the jugular on the break. However, when Faton Toski missed an early chance to put the tie to bed, you wondered if nerves would start to creep in.

It was hard to see Bochum retreat into their shells too much, however, as the second half was playing along in much the same brutal fashion as the first. This meant that space was available, and Bochum were always presented with the chance to keep on attacking in it. Things started to look up for the promotion contenders as the minutes went by, as Düsseldorf had already equalized Greuther Fürth, and Duisburg were starting to fall apart physically – Benjamin Kern, carrying a knock after a challenge with Korkmaz, was replaced by Bruno Soares.

Chances were being created and wasted by both sides – Schäffler and Toski both blazing over as the hour mark came and went. As we passed 65 minutes, it was Duisburg who had hauled themselves on top. Although Bochum still looked to press high, their defence was unwilling to venture too far forward, leaving a huge gap between each of their banks. Duisburg were playing with urgency, although their passing was still generally a bit too errant. They came closest to equalizing from Filip Trojan’s left-footed free-kick in the 65th minute, which was curled around the wall but past the post.

As their guests upped the ante, with Trojan and Ivica Banović positioned increasingly closer to Schäffler, Funkel made more of an effort to keep his banks closer together, and narrowed them accordingly. This stifled Duisburg’s momentum a little, so Šašić looked to regain the upper hand by replacing Trojan with a striker, Maurice Exslager, and looking to prioritise direct tactics again. Funkel also injected some fresh energy into his team, but did so more cautiously, replacing a midfielder with a midfielder. Thus, Paul Freier, 31-years-old and with Bochum since youth football, was replaced by fellow veteran Giovanni Federico. The Italian made an instant impact, increasing Bochum’s lead in the 81st minute after yet more casual passing by the home side was allowed to proceed under little pressure on the edge of the box. After a training ground one-two, Federico emulated Aydın’s calm and well-placed right-footed curler in the first half for 2-0, giving Yelldell no chance.

But moments later, Exslager so nearly got his side back into the game. Bursting through the right-hand side of the box onto a seemingly aimless pass, the striker’s quick change of pace and agility allowed him to arrow a surprise sharp shot across goal, shaving the post on its way out. Duisburg continued their bid for a consolation goal or equalizer in the immediate aftermath of that chance, and found themselves caught short. Toski, an inspiration and driving force in the attacking central midfield position throughout the second half, found space deep in his own half on the right side, thread a perfectly weighted pass forward, and homing in on goal with the ball, Aydın made no mistake with the finish. It was now 3-0 to the hosts, with three minutes left to play.

Two minutes later, Exslager did his chances of making a cup final appearance no harm, finishing after being located in the box by Yılmaz. It was too little, too late for Duisburg, who finish the season in eighth place. Bochum will now play Gladbach in the promotion/relegation play-off, with the first leg taking place on May 19 (19:30 UK time), followed by the second leg six days later.