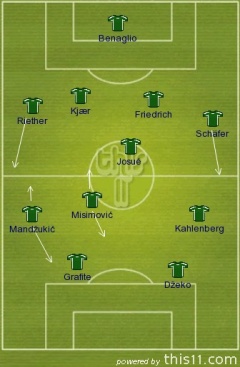 For starters, Obafemi Martins, a peripheral figure last season, has been sold to Rubin Kazan. This was the right move for all concerned, with the Nigerian striker never settling in Germany.

As Lorenz-Günter Köstner stuck by Felix Magath’s 4-3-1-2, last season’s Plan B tended to be an injection of width, rendering the former Inter striker surplus to requirements.

Also shown the door have been Jan Šimůnek, an unexceptional full-back from the Czech Republic, and South American midfielder Jonathan Santana. END_OF_DOCUMENT_TOKEN_TO_BE_REPLACED