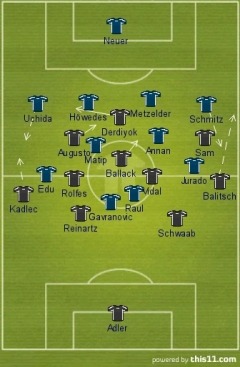 Leverkusen strolled to a win against a disinterested and focus-lacking Schalke side to put pressure on Dortmund at the top of the table.

Both sides came into this fixture on the back of significant happenings in continental competitions. Schalke, having overcome Valencia in the last 16 of the Champions League, found out that they’d be facing Inter for a place in the semi-finals. Even more newsworthy for them was the fact that coach Felix Magath had been shown the door, and Ralf Rangnick was back at the club for a second spell. With a vastly contrasting personality to Magath, not to mention a different approach to the game, it’ll be interesting to see how Schalke take to their new manager. However, this game came too early to make such assessments, as Seppo Eichkorn took charge as caretaker for the first and final time. Leverkusen, meanwhile, were dumped out of the Europa League in the week by Villareal. With both Hannover and Bayern Munich winning yesterday, the pressure was on them to grab all three points here in order to keep their grip on a Champions League place. Intriguingly, a win would also take them closer to Dortmund – seven points closer, anyway. END_OF_DOCUMENT_TOKEN_TO_BE_REPLACED 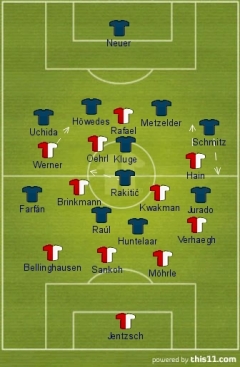 Schalke struck late winner to eliminate plucky Augsburg from the DFB-Pokal and move into the quarter-finals. This was the fifth consecutive game the Gelsenkirchen side had won in all competitions, and they’ll be disappointed that the winter break now eats into that momentum. The defeat was the first suffered by Augsburg in more than two months, but they won’t be too disheartened as they seek to gain promotion to the top-flight for the first time in their history.

It was a typical opening to a German game – fast and frenetic, with the ball back and fore with no one side particularly in control. Augsburg already had their defence set deep, but Gibril Sankoh looked to step out throughout the game to mop up and kill the ball during its journey from A to B. On top of the deep defence were two restrained defensive-midfielders: Jos Luhukay was playing a 4-2-3-1, and looking to kill the hole in which Schalke might concoct something for their two strikers – one of whom, Raúl, likes to play in this zone whenever Ivan Rakitić is bobbing elsewhere. This tactic worked against Augsburg defensively as it ensured that the home team’s midfielders were always pinned back, creating an occasional gap to the forward-four that meant the only way a side low on quality could reach them was via a long ball.

Whereas Augsburg at least had an attacking tactic, Schalke seemed to lose all impetus and ideas going forward as soon as the stopwatch hit the tenth minute. Initially, they passed the ball about on the floor near halfway, trying to draw their hosts out, before running the ball at the deep defence – exploiting the gap between wide-attacker and full-back Augsburg had left. Lukas Schmitz was rampant within that quality-telling ten minute spell, but Paul Verhaegh gradually began to cork him, and shuttled forward more freely himself down the flank. To be fair, Schalke did start to come back into things five minutes before the break, this time using the opposite flank as the tricky Jefferson Farfán sought to take advantage of the static and deep Axel Bellinghausen. But as had been the case in the previous 40 minutes – the same applies to Augsburg, particularly Tobias Werner, too – the ball into the box was weak.  END_OF_DOCUMENT_TOKEN_TO_BE_REPLACED 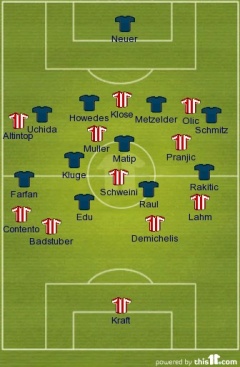 How Bayern Munich and Schalke lined-up in the former's 2-0 Super Cup victory recently. Schalke's reticence and aversion to the ball was as rigidly operated as you'd expect from a Magath team. Schalke's walls narrowed the angles, the forwards and Joel Matip penned Bastian Schweinsteiger in a triangular prison.

The ruthless disciplinarian is impossible to second-guess, as he’ll relentlessly tinkers tactics and personnel between or during matches, and last season, even removed poor Christoph Moritz 22 minutes after bringing him on in the derby!

Balancing Bundesliga and European battles will be tough for the Gelsenkirchen side, regardless of their hefty, youthful squad which has been endowed by the quite astounding acquisition of Raúl.

Save for the ageing Real Madrid legend, strikers are only conspicuous by their absence at the club right now. With Kevin Kurányi lured to Russia, Edu Gonçalves is as senior as the back-up comes. Nevertheless, expect that situation to be remedied imminently. END_OF_DOCUMENT_TOKEN_TO_BE_REPLACED