Borussia Mönchengladbach go into the final game of a tremendous first half of the 2011/12 Bundesliga season knowing a win could see them spend the winter break in second spot. Their guests tomorrow afternoon, Mainz, are nearer to the wrong end of the table, and could end the weekend in or just above the relegation zone if they lose here and the teams below them pick up points. The sides’ respective positions are in marked contrasts to where they finished in the 2010/11 season, with Mönchengladbach staying up by the skin of their teeth after beating Bochum in the relegation play-off, and Mainz leading the league and spending most of the seasons in the Champions League spots before being edged out at the death and into a still-very-respectable Europa League berth. END_OF_DOCUMENT_TOKEN_TO_BE_REPLACED 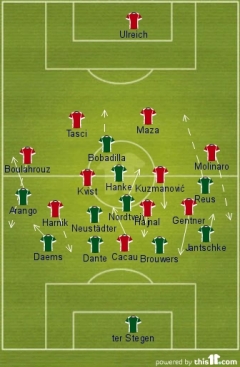 Borussia Mönchengladbach and Stuttgart played out an entertaining draw on day two of the Bundesliga, as both sides made it four points out of a possible six. Although the attack-minded Stuttgart pressed brilliantly and played some nice first-time and full-back led football, 19-year-old ‘keeper Marc-André ter Stegen was on top form. Although his Gladbach outfield colleagues were second-best for large periods of the game, they did show occasional signs of being a decent footballing side capable of splicing an opposition defence with some first-time triangle-based football of their own. And out of possession, they sat off in an impressively disciplined 4-4-1-1, limiting the amount of space wanted by Stuttgart’s marquee summer signing, William Kvist, in the quarterback position.

The home side immediately took charge of the game, opening the visitors’ defence up within 90 seconds. The recipient of that bouncing pass, Marco Reus, attempted to lob the onrushing Sven Ulreich, but the midfielder’s effort landed just over the left stanchion. With Stuttgart standing relatively high early on, Gladbach continued to ping passes over the top of their defence, Raúl Bobadilla the primary chaser and target. END_OF_DOCUMENT_TOKEN_TO_BE_REPLACED