Two of the pre-season promotion favourites will try and get their flagging 2. Bundesliga campaigns back on track on Saturday afternoon as St Pauli visit Energie Cottbus. Both teams lost last weekend, with Cottbus going down 4-2 to Fortuna Düsseldorf, and St Pauli suffering their first home defeat at the hands of Aue.

Saturday lunchtime’s visitors have looked a bit iffy on the road so far this season, having lost to Eintracht Braunschweig and Eintracht Trier (in the cup), and also sharing a draw with another Eintracht, Frankfurt. However, they comprehensively and professionally defeated Karlsruhe in their last away match, showcasing the effectiveness of new coach André Schubert’s floor-based and positionally-fluid football system. Cottbus, meanwhile, sat five points and five places behind Pauli in ninth, are certainly missing the presence of last season’s 2. Bundesliga golden boot Nils Petersen (who joined Bayern Munich over the summer). END_OF_DOCUMENT_TOKEN_TO_BE_REPLACED 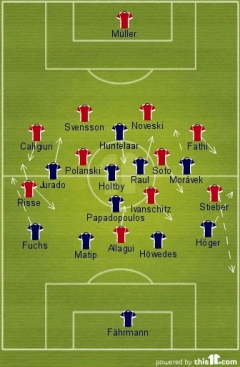 The first half formations. Ivanschitz took advantage of the space behind Raúl, with Papadopoulos often extremely isolated.

Schalke stormed back from 2-0 down to deny Mainz the chance to go back to the top of the table. The home side stopped the visitors from playing in the first half with their intense pressing and energetic attacking, but Schalke coach Ralf Rangnick rang the changes at the interval and reaped the benefits; his Jefferson Farfán-inspired side eventually proving too strong and clinical for Mainz.

Mainz got things under way at their new Coface Arena, coach Thomas Tuchel starting with the same team that defeated Bayer Leverkusen 2-0 on the opening day of the new Bundesliga season. They put Schalke’s deep 4-1-4-1 under pressure early on, forcing the visitors into fouls, back-passes, and hurried sideways delegation-balls whenever Schalke did get possession or territory. Rangnick’s game-plan seemed to hinge on his side getting the chance to counter-attack, as illustrated in the fourth minute when his four banks sat in their own half, only pressing the pass-assessor when they were primed to cross halfway.

In that particular instance, Lewis Holtby won the ball, dribbled upfield, before stalling so as to wait for the sprinting widemen – the only place for the visitors to build was in the home side’s half, especially when Mainz’s players were darting back more concerned about getting into position. Holtby slid the ball one way, before it was disguised via another pass to go out to the opposite flank. The eventual cross, from Jan Morávek, was a few inches too high, however. END_OF_DOCUMENT_TOKEN_TO_BE_REPLACED

Round 30 began on Friday night with a game between two sides experiencing seasons beyond their wildest dreams. Hosts Mainz came into this match against Mönchengladbach in 5th spot – looking well set to secure a spot in next season’s Europa League, despite briefly flirting with qualification for the Champions League up until a few weeks ago. However, their last win in the league was nearly a month and a half ago. Their visitors, on the other hand, had ambitions of at least finishing in mid-table at the start of the season, but with five games to go, they came into this game bottom of the table. Nevertheless, they thrashed Köln 5-1 last week, giving their survival hopes a shot in the arm (Mainz lost 2-0 to Hannover, perhaps finally ending any lingering Champions League hopes). Thomas Tuchel had several key players missing for this game, including Bo Svensson, Nikolce Noveski, Jan Šimák, Zsolt Lőw, Ádám Szalai, and Heinz Müller. Visiting coach Lucien Favre was blessed in comparison – the only notable absentees being Paul Stalteri and Igor de Camargo. Intriguingly, both coaches seemed to ditch the status quo in naming their line-up’s, picking more offensive formations than was expected. END_OF_DOCUMENT_TOKEN_TO_BE_REPLACED

Dortmund dropped points for the second week in succession as a spirited performance from Mainz in the final-quarter of the game and a last-gasp equalizer proved enough to hold the runaway league leaders to a draw.

Both sides came into this game on the back of disappointing 1-0 defeats – Dortmund to Hoffenheim, and Mainz to Leverkusen. They were the success stories of the first half of the campaign, but whereas Dortmund have stayed in good form after the winter break, Mainz have been up and down. There were a number of notable injured absentees – Shinji Kagawa and Patrick Owomoyela for the hosts, and Jan Šimák, Zsolt Lőw, Ádám Szalai and Marco Caligiuri for the guests. END_OF_DOCUMENT_TOKEN_TO_BE_REPLACED