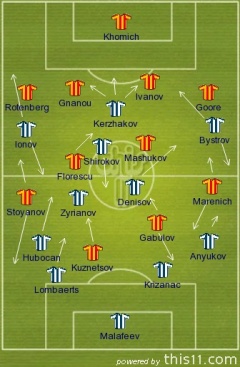 Both ties were similar – Luciano Spalletti’s Zenit top the Russian Premier League, while Real are Major League Soccer’s team to beat. In comparison, Alania and Chicago both linger in the lower echelons of their respective divisions.

Unsurprisingly, that aforementioned duo showed their lofty positions to be no coincidence, brushing aside their opponents by scorelines of 3-1 and 1-0 respectively.

Neither Vladikavkaz or the Fire appeared overwhelmingly blunt up top, yet defensive lapses proved the undoing of two teams in 4-4-1-1 systems.

Both sides accepted their underdogs roles pre-match, so therefore picked XIs capable of sitting and stifling in disciplined banks. END_OF_DOCUMENT_TOKEN_TO_BE_REPLACED