Holger Stanislawski and his right-hand man André Trulsen return to the city of Hamburg for the first time since leaving St Pauli in the summer. They go back to take on HSV with a Hoffenheim side who are falling into mid-table obscurity a little earlier than normal. Professionalism aside, Stanislawski will not only be desperate to win in a bid to ensure his side keep up with the early-season European-spot pace-setters, but also because he has the chance to keep St Pauli’s arch-rivals mired in relegation trouble. Hamburg, who are now off the bottom of the table after a several-month stint, could feasibly end the weekend as high as 12th if they beat Hoffenheim. However, despite a decent 2-2 draw away at Bayer Leverkusen in the fixture played before the disruptive two-week international break, Hamburg, Augsburg and 2. Bundesliga side FSV Frankfurt are the only teams in Germany’s top three divisions yet to win a home game so far this season. END_OF_DOCUMENT_TOKEN_TO_BE_REPLACED 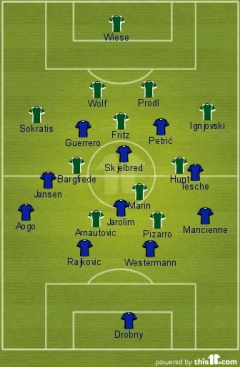 The bogged-down in midfield formations I expected to see...

Hamburg stay rooted to the bottom of the Bundesliga table without a victory to their name despite an improved performance in the derby. Werder Bremen were good value for their 2-0 win, however, after creating more chances than their beleaguered north German rivals. The three points, courtesy of a Claudio Pizarro brace, takes Thomas Schaaf’s side back up to second place in the table, with winnable games against Nuremberg and Hertha BSC coming up next.

Looking at the line-ups, I was expecting to see a very narrow derby game being played out by two sides deploying 4-4-2 diamond systems. However, as Bremen calmly spread the ball about in their own half and around halfway once the game underway, it was apparent that the visitors, at least, were in a flat 4-4-2 (Per Ciljan Skjelbred starting on the right wing).
Their coach, Michael Oenning, had obviously told his players to start cautiously, sitting off and absorbing the early pressure from Schaaf’s side. And, the tactic so nearly worked to perfection in the fourth minute, when Paolo Guerrero was fed on the left, used the floating and interchanging Marcell Jansen and Mladen Petrić as decoys, before scooping a cross towards the ghosting Skjelbred, who missed the ball by mere inches.

The chance sparked Bremen into life, as they held possession in the final-third and produced a few crosses and a wayward Phillip Bargfrede shot in a two-minute spell. Nevertheless, in the sixth minute, Jansen called Tim Wiese into action after a positive Hamburg move. The piano-carrying David Jarolím switched play, allowing Michael Mancienne to come upfield, before dropping a shoulder and dribbling into and in the infield space. END_OF_DOCUMENT_TOKEN_TO_BE_REPLACED