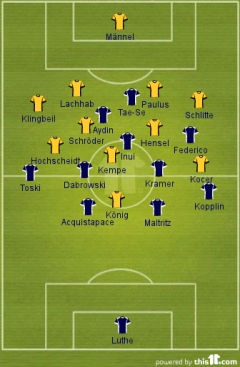 Faton Toski grabbed two goals and three assists as Bochum gave Aue a harsh lesson in the virtues of taking your chances. Despite the hosts bossing the ball in the opening 45 minutes of this Sunday afternoon 2. Bundesliga clash between two mid-table sides, Aue actually had more chances, but were profligate and up against Bochum’s impressive goalkeeper, Andreas Luthe. But, at the other end, Toski and Christoph Kramer helped tear Aue open, with Marcel Maltritz, Mirkan Aydın and Toski himself scoring the goals that gave coach Andreas Bergmann’s side a 3-0 lead at the break. The hosts added two more goals to their tally shortly after the restart, with Toski unplayable and Aue seemingly having thrown in the towel, before Aydın grabbed his second and Bochum’s sixth to cap a memorable day.

The away side made much the better start, hitting their narrow hosts down the flanks and just generally showing more hunger and power early on. Nevertheless, Luthe was relatively untroubled in the Bochum goal during the first five minutes, and Maltritz stuck to burly dangerman Ronny König like glue. And, it was the home side who had the first real chance of the match through Jong Tae-Se. The North Korean star sliced his right-footed effort wide under little pressure, mind – getting the opportunity in the first place after Aue made a meal of clearing a free-kick, and then being played onside by the ball-watching, trudging-out Adli Lachheb. A minute later, a square was played across the edge of the box to Takashi Inui, who cleverly let the ball run across his body, before having his shoulder-dropping, dummy-throwing jinx halted just before he pulled the trigger. END_OF_DOCUMENT_TOKEN_TO_BE_REPLACED 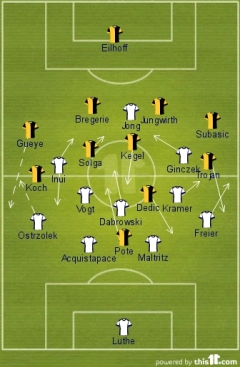 Bosnia and Herzegovina left-back Muhamed Subašić scored two goals on a memorable début as Dynamo Dresden defeated Bochum in a battle between two of 2. Bundesliga’s early season strugglers. However, the game was changed during the closing stages of the first half when Bochum’s Japanese winger Takashi Inui received a harsh second yellow card. His side had looked the slicker of the two teams for the majority of the opening 45 minutes, and their quality might just have seen them over the line had they kept 11 men on the pitch. But, they didn’t, and roared on by a vociferous home crowd, Dresden took full advantage, and move up from 16th to 10th in the league. Bochum, meanwhile, remain second bottom.

Bochum got comfy in the opening stages, and knocked the ball about on the floor from touchline to touchline. Dresden sat off in a compact 4-4-2, not pressing too fiercely, and seemingly content to let their guests have the ball so that they could play on the counter. The home side looked stodgy and nervous when in possession, and could barely string two passes together, let alone play something good enough to splice the banks in Bochum’s off-ball 4-1-4-1.

Some individual play provided the match’s first chance, however, as Jong Tae-Se’s head-down dribble at the hosts’ defence drew a dangerously positioned free-kick in the ninth minute. END_OF_DOCUMENT_TOKEN_TO_BE_REPLACED