They may have beaten Real Madrid in the Champions League on Wednesday night, but Borussia Dortmund travel to a Freiburg side who sit just one point behind them in the table this weekend. Jürgen Klopp’s reigning 1. Bundesliga champions currently trail league-leading Bavarian giants Bayern Munich by 12 points after just eight games, with inconsistent away form being Dortmund’s major problem.

However, last weekend’s home loss in the Revierderby against Schalke emphasised just what a difficult period Dortmund are currently enduring domestically, with Klopp’s decision to play a three-man defence in that game backfiring. The return to his usual 4-2-3-1 in the 2-1 victory over Real Madrid means that such an experiment is extremely unlikely to be risked again tomorrow.

Freiburg, meanwhile, are floating along nicely, although given the limited resources at coach Christian Streich’s disposal, he’ll be thinking the sooner his side can reach the 35-point mark, the better. After last weekend’s 2-0 win over woeful Wolfsburg, Freiburg only need another 24 points from the 26 matchdays left to play to achieve that target, and who would bet against them at this stage to earn a fifth successive season in 1. Bundesliga? END_OF_DOCUMENT_TOKEN_TO_BE_REPLACED

Borussia Dortmund capped a memorable week by hammering Cologne 6-1 to restore their five-point cushion over Bayern Munich at the top of the Bundesliga table. Coming on the back of reaching the German Cup final after defeating Greuther Fürth on Tuesday, Jürgen Klopp’s side were simply too good for Ståle Solbakken’s relegation battlers, who end the weekend just one point above the drop-zone. This result is also the joint-worst in Cologne’s history of home games: the other side to have ever beaten them 6-1 in the cathedral city? Borussia Dortmund, this time in 1994.

But, here and now, the technically limited 2012 crop of players were unable to get star man Lukas Podolski into today’s game, and as a result, Cologne rarely troubled their guests, who look inspired in attack thanks to the efforts of the magnificent and effervescent Shinji Kagawa. Solbakken’s side now face an absolutely crucial game away at a rejuvenated Augsburg next weekend, while Klopp’s champions-elect face a trickier tie than the one they breezed through at the RheinEnergieStadion this afternoon as they host in-form Stuttgart at the Westfalenstadion.

After securing a record 20th game without defeat last weekend, and then reaching the DFB-Pokal final in the week, Borussia Dortmund travel to Cologne this Sunday looking to continue a run of form that bears all the hallmarks of a Championship-winning side. In defeating Werder Bremen 1-0 at the Westfalenstadion thanks to an early goal from the in-form Shinji Kagawa, Jürgen Klopp’s side ensured that they entered the 27th round of the 34-game season with a five-point cushion over second-placed Bayern Munich. The Bavarian side, who have a far superior goal difference to Dortmund thanks primarily to their recent thrashings of Hoffenheim and Hertha BSC, will meet Dortmund later on this season in the German Cup final, after they defeated Borussia Mönchengladbach on Wednesday – one day after Klopp’s side put plucky 2. Bundesliga-leaders Greuther Fürth to the sword. END_OF_DOCUMENT_TOKEN_TO_BE_REPLACED 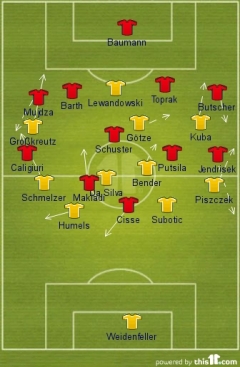 Borussia Dortmund cruised to victory against a Freiburg side who should be made to refund the 4,000 or so travelling fans who took the four-and-a-half hour journey to North Rhine-Westphalia from Baden-Württemberg.

Dortmund came into this game experiencing something of a wobble, scoring just one win from the last four games. Their once colossal lead at the top of the table now stood at five points, and were it not for Jakub ‘Kuba’ Błaszczykowski’s late leveller at Hamburg last week, the distance between themselves and Bayer Leverkusen would have been even more slight. Fortunately, Leverkusen’s abysmal display and performance at Bayern Munich in the hours ahead of this game did little to suggest that Dortmund’s lead was truly under threat. Freiburg coach Robin Dutt has already signed a contract to take over at Dortmund’s immediate *title rivals* next season, and this game was a great chance to immediately make himself popular with Bayer fans. If he wanted to appease any Freiburg fans unhappy with his departure, a victory here would also be crucial – Dutt, his players and the fans knew that a loss at Signal-Iduna-Park would finally extinguish their Europa League aspirations. They won last time out, 3-2 against Hoffenheim, but that was their first taste of glory in six games. In Dortmund, Dutt had to make do without Pavel Krmaš, Yacine Abdessadki, Simon Pouplin, Felix Bastians and Jan Rosenthal. END_OF_DOCUMENT_TOKEN_TO_BE_REPLACED