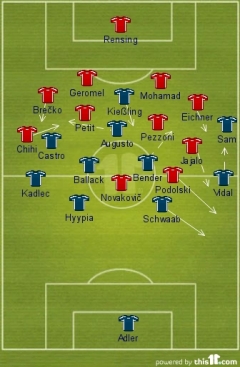 Bayer Leverkusen conceded the title to Dortmund but secured their spot in next season’s Champions League group stage – despite losing the Rhine derby to Cologne, who now move four points clear of the drop zone.

With Wolfsburg beating Werder Bremen the evening before this Saturday afternoon game, Cologne were once again in the thick of the relegation battle. A disastrous loss of form and the sudden departure of coach Frank Schaefer in the week meant that Leverkusen were the clear favourites for this tie. Dortmund were playing simultaneously, with both they and Leverkusen knowing that a loss for Dortmund and a win for Leverkusen would see the gap at the top reduced to two points. But for Jupp Heynckes’s side, the real goal was simply to win irrespective of how Dortmund got on, as three points here would guarantee the club’s place in the Champions League group stages for next season (even if Heynckes is Bayern Munich-bound). END_OF_DOCUMENT_TOKEN_TO_BE_REPLACED