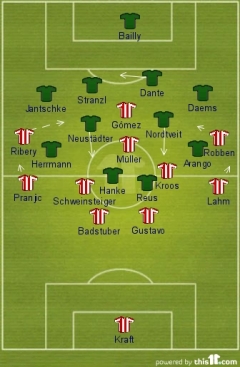 Bayern Munich moved back into the Champions League spots after a narrow and unconvincing win against plucky Borussia Mönchengladbach.

At the start of the current campaign, it’s unlikely that the bigwigs at Bayern and Gladbach would have expected to see their sides struggling to reach the Champions League and avoid the drop respectively. If some people were putting Bayern’s topsy-turvy season down to tiredness, the recent batch of EURO 2012 qualifiers and friendlies could not have come at a worse time – 12 players were called up to represent their nation, compared to Gladbach’s eight (four of whom played for the Germany U19 side, and thus aren’t near Lucien Favre’s first team at club level).

There were few injury problems affecting either side at least, so this tussle between two teams with very different goals would ultimately be decided by events on the pitch only. For the visitors, Mo Idrissou was finally dropped from the starting XI and Logan Bailly kept his place after a howler in round 27. There were no surprises in the home side’s line-up, however.  END_OF_DOCUMENT_TOKEN_TO_BE_REPLACED