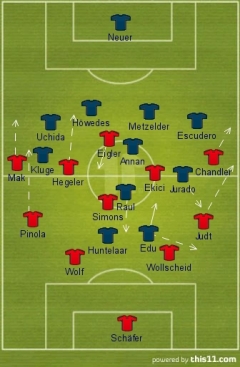 The formations during the first half-hour.

Schalke again flattered to deceive as this tie between two of the Bundesliga’s middling sides ended in a draw.

Nuremberg came into the game looking to make it five wins in a row, the side on an impressive run of taking 14 points from the last 18 available. The Bavarians are as good as safe from relegation, and travelled to the Arena AufSchalke in a buoyant mood, perhaps seeking revenge for their DFB-Pokal exit at the hands of Felix Magath’s men last month. Schalke, sitting in tenth spot and still in the Champions League, were six points behind the Bavarians in the league. More pressing fixtures than this one were on the horizon in the shape of their second leg against Valencia, and the DFB-Pokal semi-final with Bayern Munich. END_OF_DOCUMENT_TOKEN_TO_BE_REPLACED