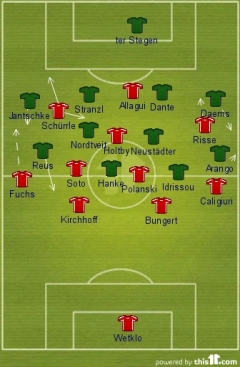 Round 30 began on Friday night with a game between two sides experiencing seasons beyond their wildest dreams. Hosts Mainz came into this match against Mönchengladbach in 5th spot – looking well set to secure a spot in next season’s Europa League, despite briefly flirting with qualification for the Champions League up until a few weeks ago. However, their last win in the league was nearly a month and a half ago. Their visitors, on the other hand, had ambitions of at least finishing in mid-table at the start of the season, but with five games to go, they came into this game bottom of the table. Nevertheless, they thrashed Köln 5-1 last week, giving their survival hopes a shot in the arm (Mainz lost 2-0 to Hannover, perhaps finally ending any lingering Champions League hopes). Thomas Tuchel had several key players missing for this game, including Bo Svensson, Nikolce Noveski, Jan Šimák, Zsolt Lőw, Ádám Szalai, and Heinz Müller. Visiting coach Lucien Favre was blessed in comparison – the only notable absentees being Paul Stalteri and Igor de Camargo. Intriguingly, both coaches seemed to ditch the status quo in naming their line-up’s, picking more offensive formations than was expected. END_OF_DOCUMENT_TOKEN_TO_BE_REPLACED

Bayer Leverkusen gave themselves a four-point cushion in the Champions League spots after capitalising on a Mainz mistake to win a game that looked certain to end goalless.

Both sides were in decent runs of form coming into this game, and won emphatically in the last round of fixtures: Mainz 4-2 at Hamburg, Bayer Leverkusen 3-0 at home to lowly Wolfsburg. The table made happy reading for fans of either side, with the hosts sat in fifth spot, knowing a win would see them leapfrog Bayern into fourth, and the visitors sat two points clear in second, knowing a win would take them to within nine points of league leaders Dortmund. Thomas Tuchel, linked this week with a move to Leverkusen should Jupp Heynckes depart for Bayern Munich, made three changes to his side, bringing in goalkeeper Christian Wetklo, and new full-backs. He retained the diamond midfield and wide forwards system that worked superbly in the second half against Hamburg last weekend. As for Bayer, who lost 3-2 at home to Villareal in the Europa League midweek, there was finally room for Michael Ballack in the starting XI. Arturo Vidal also returned, and with Ballack and Lars Bender behind him, started in a more advanced midfield role behind Stefan Kieβling. Against Hannover (2-0) & Nuremberg (1-0) on matchdays 20 & 21, Ballack & Rolfes were used behind Vidal to superb effect, but this was the first time this particular trio had started a game together. The talismanic Rolfes (and his Mainz counterpart Lewis Holtby) was on the bench. END_OF_DOCUMENT_TOKEN_TO_BE_REPLACED

A decisive second half performance from Mainz saw them defeat inconsistent Hamburg after the home side had taken a controversial lead via a goal that didn’t actually cross the line.

Mainz came into this game knowing a win would lift them above Bayern Munich and into fourth spot. Hamburg knew a win by two clear goals would lift them above Mainz into fifth. As if to spice things up even further, it was the home side who ended Mainz’s spectacular start to the season, winning at the Bruchweg stadium with a late Jose Paolo Guerrero goal back in October. For the visitors, there was no Miroslav Karhan, Ádám Szalai or Sami Allagui – all three ruled out through injury. As difficult to second guess as ever, Thomas Tuchel left Lewis Holtby and Christian Fuchs on the bench. Hamburg, on the other hand, were at full strength (with Ruud van Nistelrooy on the bench), and looking to bounce back after drawing last weekend at struggling Kaiserslautern. END_OF_DOCUMENT_TOKEN_TO_BE_REPLACED

A Frank Schaefer tactical masterclass and lacklustre Mainz performance lifted Cologne out of the relegation zone and denied Mainz the chance to leapfrog Bayern Munich into the Champions League spots.

The game looked set for a slow opening period when Cologne’s use of the kick-off saw them punt the ball upfield for a Mainz and Heinz Müller restart. However, slick Mainz, keeping a defensive trio deep despite Milivoje Novakovič being the foremost player for the hosts, used the former Barnsley ‘keeper’s goal-kick well, carving out an early chance from it which André Schürrle wasted. True to (very early) form, Cologne hoofed the ball upfield again, this time getting some success by winning a free-kick about three-quarters of the way up the pitch on the right-hand side. Lukas Podolski curled it into the box, and poor tracking and positioning from the away side allowed Martin Lanig to glance the ball in for 1-0 with just 150 seconds on the clock. END_OF_DOCUMENT_TOKEN_TO_BE_REPLACED