MARIO Gómez netted his first goal of the 2012/13 campaign as Bayern Munich strolled to victory against a lacklustre Hannover side. Admittedly, Mirko Slomka’s team had finished a Europa League tie against Dutch outfit FC Twente just over 40 hours before this afternoon’s German league game kicked off, but, mentally as well as physically, his side were second-best and disinterested all over the pitch. Jupp Heynckes’ Champions League silver-medallists barely had to get out of second gear all game. Thanks to athletic goals from Toni Kroos and Javi Martínez, Bayern were comfortably 2-0 up with the points in the bag with just over a quarter of the match gone. Franck Ribéry added a third before half-time, Dante made it 4-0 in the 62nd minute, before Gómez made it 5-0 a mere 26 seconds after coming on as a substitute! Today’s result helped Bayern extend their lead at the top of the table to nine points; aided by Schalke and Eintracht Frankfurt playing out a draw.

Save for the odd flash of genius and incision from Lars Stindl, Hannover lacked any sort of cutting edge or creation at the Allianz Arena. Thus, some might deem Slomka’s decision to leave Jan Schlaudraff – a rabbit-out-of-the-hat type of midfielder-cum-attacker – on the bench throughout today’s match, let alone not starting the 29-year-old, a mystifying decision. One can only assume Slomka figured it wasn’t worth risking Schlaudraff in a game against his former employers, against whom he likely has a point to prove after a disappointing spell at the Allianz Arena several seasons back. With Greuther Fürth and Mainz to come in the next week, games from which Hannover should take six points, perhaps Slomka was just being canny and far-sighted. Bayern, meanwhile, who have won 22 of their last 24 games against Hannover in Munich, go to Freiburg on Tuesday, before hosting Borussia Dortmund next weekend. Jürgen Klopp’s reigning champions moved up to second spot in 1. Bundesliga today after winning at Mainz, and it is imperative that they get something from that showdown in Munich. If Dortmund play anything like Hannover did today, though, they won’t stand a chance.

A Franck Ribéry-inspired Bayern Munich bounced back from their midweek Champions League humiliation in Switzerland by comfortably defeating a feeble Schalke side. The visitors offered next to nothing from first to last, with all their big name players struggling to get involved. Bayern coach Jupp Heynckes, on the other hand, will be absolutely delighted by the performance of his players, who showed some of the urgency they have lacked over the last few weeks. His one regret, though, will be the fact that the 2010 Bundesliga champions missed the chance to make their goal difference advantage over league-leaders Dortmund even greater than it currently is (plus four). With Borussia Mönchengladbach drawing against Hamburg on Friday night, this win moves Bayern back up to second spot: one point behind Jürgen Klopp’s side, who face Hannover later this afternoon. Schalke, meanwhile, will just be thankful that Werder Bremen lost at home to Nuremberg yesterday afternoon – thereby ensuring that the Gelsenkirchen outfit remain seven points clear in the fourth and final Champions League qualification spot.

It’s a battle between two of the four sides still in the hunt for the title this Sunday, as Schalke travel to the Allianz Arena to take on Bayern Munich. Both sides were in action during the week, with Schalke overcoming Viktoria Plzeň after extra-time to reach the next round of the Europa League, and Bayern continuing their poor run of recent form by losing 1-0 away at Basel in the Champions League.

Compounded by a run of two wins in their last five league games, the Bavarian side have looked bereft of drive and determination in recent weeks, with last Sunday’s 0-0 draw at Freiburg being a particularly listless showing. Question marks remain over the form and best use of Arjen Robben and Thomas Müller, among others, while players such as Rafinha – who, like Manuel Neuer, is a former Schalke player – have looked out of their depth in recent weeks. Having said that, Schalke remain the underdogs for this clash, as Bayern still arguably boast the best first XI in the Bundesliga, and Mario Gómez is joint top goalscorer in the league – the number one spot being shared with Klaas-Jan Huntelaar, who will be hoping to fire Schalke to their first Bundesliga victory in Munich since the 2008/09 season.
END_OF_DOCUMENT_TOKEN_TO_BE_REPLACED 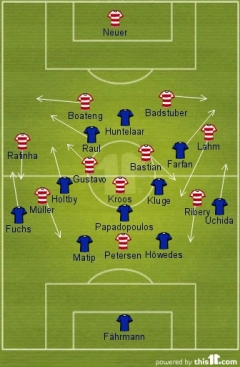 Bayern Munich beat Schalke 2-0 to return to the top of the Bundesliga table. Manuel Neuer, booed throughout on his return to the Veltins-Arena, kept a clean sheet for the seventh game in a row, although Bayern were lucky that Klaas-Jan Huntelaar didn’t bring his shooting boots as the Dutchman and one or two other of his colleagues had enough chances to kill Bayern off in the first half. However, those moments weren’t capitalised on, and with the hosts tiring in the second half, a Franck Ribéry-inspired Bayern eventually cruised to victory despite the absence of both Arjen Robben and Mario Gómez.

Bayern bossed possession from the off, spreading it about among the fluid foremost six players, as well as the centre-backs and full-backs. The hosts were playing something of a 4-3-3, with the narrowness of the midfield designed to help keep the string-pulling likes of Bastian Schweinsteiger and Toni Kroos quiet. It was a foul-laden opening ten minutes, with Kyriakos Papadopoulos & co. hacking and hounding to stop Bayern getting more comfortable than they already were.

Although Bayern – looking to expose Schalke’s lack of midfield width through a series of long-diagonals to and attacks down the channels – were in control, they had nothing to show for it bar Gómez’s stand-in Nils Petersen going close and a couple of corners. END_OF_DOCUMENT_TOKEN_TO_BE_REPLACED

Manuel Neuer makes his return to Gelsenkirchen tomorrow night as Bayern Munich travel to Schalke. The visitors are in great form coming into this game, and their summer signing from Schalke, Neuer, has now kept six consecutive clean sheets for the 2009/10 Bundesliga champions. Both Bayern Munich and Schalke played in European competition during the week, with Ralf Rangnick’s side drawing 0-0 at Steaua Bucharest in the Europa League, and Jupp Heynckes’ winning 2-0 at Villareal in the Champions League. Even right-back Rafinha scored in that game, and the Brazilian defender is another player making his return to the Veltins-Arena after leaving for Genoa two seasons back.

He and his defensive colleagues will have their work cut out keeping Raúl corked tomorrow, while Rafinha is going to be in for a tough afternoon in his one-on-one duel against the in-form Peruvian Jefferson Farfán too. Nevertheless, all eyes will mainly be at the other end of the pitch, with Franck Ribéry and Mario Gómez in scintillating form, the pair scoring goals and assisting them for fun so far this season. END_OF_DOCUMENT_TOKEN_TO_BE_REPLACED

The formations adopted as the first half drew to a close.

Bayern Munich stormed back to the top of the Bundesliga with a professional performance against an alarmingly weak and lacklustre Freiburg side. Mario Gómez and Franck Ribéry were the goal-getting stars of the show, but not one man in red had a bad game – something that can’t be said for their white-shirted opponents, who look set for a season-long relegation battle.

The home side took hold of possession immediately, their initial tactic being to get Franck Ribéry on the ball; either by him coming deep to collect it, or through being fed on the overlap. The Frenchman had the trickery, pace and guile to truly trouble Stefan Reisinger and Maximilian Nicu early on, but Freiburg took advantage of their energy tanks still being full by flooding back in droves and covering the balls which entered Oliver Baumann’s box.

Bayern, who didn’t have to press that hard to force turnovers whenever deep and panicky Freiburg got their hands on a loose ball, took just seven minutes to go 1-0 up. Leaving a huge gap outside the box for Bastian Schweinsteiger to take the ball in and have a look, no pressure was applied on the German international who picked out Thomas Müller on the box edge – surrounded by bodies, but taking possession as if he had all the space in the world. He slipped in Toni Kroos through the left-hand side of the box, and the youngster squared for a  Mario Gómez tap in! END_OF_DOCUMENT_TOKEN_TO_BE_REPLACED

One of the Bundesliga’s oldest coaches comes face to face with one of the newest on Saturday afternoon as Bayern Munich take on Freiburg. Jupp Heynckes’ Bayern side cemented their position at the top of the Bundesliga table before most of the squad jetted off across the world to represent their respective countries during the international break; Marcus Sorg’s Freiburg side, meanwhile, have dropped eight points from the four games played so far in the 2011/12 Bundesliga season.

Despite starting the campaign with a 1-0 home defeat to Borussia Mönchengladbach and a scrappy injury-time victory against Wolfsburg, Bayern have hammered eight goals past Hamburg and Kaiserslautern in the two domestic games since, and also convincingly put FC Zurich to the sword to cement their place in the Champions League group stage. END_OF_DOCUMENT_TOKEN_TO_BE_REPLACED

Bayern Munich swept aside a naive and not particularly bothered Schalke side to all but guarantee their place in next season’s Champions League – aided greatly by the fact that their goal difference is now 30 goals superior to that of their nearest challengers, Hannover.

To many, this game had something of a dead rubber feel pre-match. Despite it still being mathematically possible for Schalke to go down, such an occurrence would be nigh-on impossible. As for the hosts, with Hannover losing to Gladbach earlier on in the afternoon, Bayern knew that a win here would lift them into the third and final Champions League spot – surely a position they wouldn’t relinquish with two games left to play after this one. Thus, they therefore knew that if they failed against Schalke, the likelihood of spending the 2011/12 season in the Europa League would be strong. That competition is one Schalke are destined for, so long as they win the German cup final against Duisburg on May 21. This season’s Champions League final takes place seven days after that, but Schalke won’t be there – a humiliating 2-0 home defeat to Manchester United in the first leg of one of the competition’s semi-finals in the week saw last season’s Bundesliga runners-up totally outclassed, and the upcoming second leg at Old Trafford four days after this tie against last season’s Bundesliga champions rendered somewhat meaningless. END_OF_DOCUMENT_TOKEN_TO_BE_REPLACED