As recently as 2005, Alemannia Aachen were playing in the last-32 stage of the UEFA Cup. One year later, Eintracht Frankfurt were taking part in the same continental competition, albeit one they exited at the group stage despite remaining unbeaten against the three teams who progressed at their expense – Newcastle United, Celta Vigo and Fenerbahçe. Half a decade later, however, the good times are over for both clubs, and they meet on Sunday afternoon in a 2. Bundesliga clash which sees Friedhelm Funkel return to the club he coached between 2004 and 2009. After embarking on a star-heavy recruit drive over the summer, Aachen looked as though they’d be up there with Frankfurt – who retained the majority of their Bundesliga squad post-relegation – challenging for promotion to the top-flight.  Yet, despite having one of the tightest defences in the league, goals have proved hard to come by (a mere eight in 14 games), meaning that Aachen come into this game second-bottom in the table. END_OF_DOCUMENT_TOKEN_TO_BE_REPLACED

It’s a top against bottom clash in 2. Bundesliga tomorrow lunchtime, as SpVgg Greuther Fürth travel north to take on Alemannia Aachen. If Greuther Fürth hadn’t thrown away the 2-0 lead they held at home to Eintracht Frankfurt on the opening day of the 2011/12 campaign, they’d be sat on top of the league with 21 points from a possible 21 right now. Nevertheless, they have bounced back strongly after that agonizing round one setback, knocking lowly Eimsbütteler TV out of the cup with a 10-0 scoreline and winning every league game since the Frankfurt setback.

Aachen, on the other hand, are yet to win a game, and have scored just one goal all season – 16 less than their guests for this clash. Coach Peter Hyballa was sacked on Monday and replaced – temporarily – by the man in charge of the U23 team, Ralf Außem. The former had managed to stop the rot a little at Aachen, as the club have drawn the last three games played. However, for a side supposedly built around their attack, these games have all finished 0-0; which, despite keeping their relatively impressive goals conceded tally down to eight, hasn’t done much for their hopes of ejecting out of bottom spot. END_OF_DOCUMENT_TOKEN_TO_BE_REPLACED 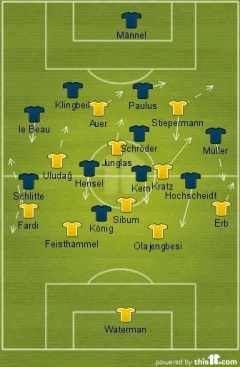 The first half formations

Limited but determined Aue overcame an Aachen side who forgot to bring their shooting boots with them to East Germany.

The away side started the game brightly, stringing together a number of sharp one-twos, looking comfortable and confident both in possession and in their formation, and playing in particular off roving front-man Marco Stiepermann, who showed some neat touches early on. But it was Rico Schmitt’s Aue who created the game’s first chance after Jan Hochscheidt showed power and strength to run from the byline boomerang-style to the D, before skying a right-footed rocket over, ruining his good work. Whereas the hosts were initially more direct in their approach to attacking, often knocking a ball down the wing for one of the widemen to chase, Aachen adopted a more structured approach, generally getting Stiepermann to drop and attempt a flick on for Benjamin Auer after building from the back. END_OF_DOCUMENT_TOKEN_TO_BE_REPLACED

The new 2. Bundesliga season continues this afternoon with one of the division’s former East German sides coming up against a club who, as recently as six years ago, reached the last 16 stage of the UEFA Cup. But you’re only as good as your last result, so the cliché goes, and if we apply that unwritten rule to league placings, then the team which represents the city of Aue (population 18,000) currently has the higher standing in German football. Whereas Aachen and their leaky defence finished in 10th place at the end of 2010/11, just as close to bottom side Arminia Bielefeld as they were to champions Hertha Berlin, today’s hosts finished in 5th spot. Nevertheless, Rico Schmitt’s side weren’t always the best  side to watch, with few goals going in at either end. Peter Hyballa’s visitors, on the other hand, took a more liberal approach to defending, but perhaps as expected from a coach who joined Aachen from the BVB youth set-up, the side could be quite exciting and very positive in attack. END_OF_DOCUMENT_TOKEN_TO_BE_REPLACED