The formations for the first quarter of the game, before the referee made it ten on ten.

Aachen stay in the relegation zone of the second division despite holding the league leaders to a draw in their first game under a new coach. The match was one of ten outfield players apiece for three-quarters of the 90 minutes, with both Aachen and Fürth seeing midfielders giving their marching orders for high feet. The league leaders looked the more technically accomplished and confident of the two sides throughout, but a defensively disciplined performance from Aachen – who don’t concede many goals these days – saw Fürth kept at bay, and on the balance of play, a draw was a fair result.

The visitors looked settled straight away, as they knocked the ball from side to side and forwards and backwards with confidence, zip and a determination to toy with their beleaguered opponents. Out of possession, they looked the better side too, as when Aachen tried to push their guests back through a David Hohs punt, Fürth’s banks were better set to pick up the loose ball, and then hold onto it in the face of heavy pressing in their own half. The hosts did manage to create a chance in the third minute, though, after pouncing on some Fürth differing. But, the cross which followed a David Odonkor head-down-and-run dribble was cleared by the well-placed hoop-shirted centre-backs, and the subsequent corner and second ball crossed into the box saw the visitors equally intelligently positioned and unfussy when it came to clearing their lines.

Both teams only really pressed in their half of the pitch, but whereas the away side looked comfortable when being hounded, stringing together a series of first-time triangles, Aachen’s players often panicked, squandering possession. However, they had Odonkor, and the former BVB man again caused havoc down the wing in the seventh minute – nutmegging the Fürth left-back before drawing a save from Max Grün. He may look painfully slow, but Odonkor was proving that a footballing brain can keep you going in spite of everyone around you being quicker.

Despite the hosts seeing less of the ball and generally being the more wasteful side when they did have it, they were the ones having the chances. Nevertheless, Olivier Occean was proving a handful with his tendency to drop deep in a flash and lay the ball off, either drawing fouls or playing slick and quick passes round the side of his tight tracking marker. Coach Mike Büskens’ full-backs were constantly fusing speed with intelligence, Heinrich Schmidtgal in particular always seeming to break at the right time to expose Odonkor’s weaker defensive abilities. And in the centre of the pitch, the midfielders were hungry to get on the ball and positive in their distribution.

Fürth’s monopolization of possession in the first quarter-hour continued as we reached the 20-minute mark; their technically gifted players skipping by the yellow-shirted opposition either via individual on-ball pirouettes or drops of the shoulder, or same-wavelength passing moves. Poor old Sergiu Radu, the lone Aachen forward, and left winger Anouar Hadouir, were having to feed off scraps, none of which were ever really that forthcoming. Yet over on the other wing, Odonkor always gave them incision and an edge when the ball came his way. In the 17th minute, he drew three men across whilst seemingly holding the ball up, before playing an inch-perfect through-ball to the undetected overlap of Shervin Radjabali-Fardi. Although the on-loan Hertha BSC man then managed to buy himself even more time on the byline by nutmegging the angle-coverer, he wasted the cross which Radu wanted played square across the six-yard box by pulling back to no one.

Between the 20th and 25th minute, Aachen enjoyed a good spell of possession in the Aachen half, with the likes of Achenbach and Kevin Kratz showing drive and helping Odonkor put crosses into the box. But the visiting centre-backs were putting in a tremendous performance, always superbly positioned to clear whatever came their way.

Nevertheless, their midfield was losing its grip on the game, and when a route one ball towards Grün’s box remained unclaimed after an Aachen knock-down, Stephan Fürstner zoomed in to make it his. However, Manuel Junglas was determined to retain possession for his side, and threw his body into the tackle while looking away. This resulted in his studs planting themselves at pace into Fürstner’s knee in an ugly collision that left the away side’s midfielder writhing in agony on the floor. The referee, Tobias Stieler, was plainly appalled by what he saw, and gave Junglas a straight red card. After finally getting a foot in the game, Aachen’s hopes looked like they had now been reduced to hanging by a thread.

However, help was on hand from no less than the referee himself three minutes later in the 26th minute, when Fürth midfielder Edgar Prib was also sent off for a high foot. This decision was far more debatable than the Junglas one, and it really did look as though the ire directed at the official by the noisy Aachen fans after the first sending off forced him into evening things up. With space now in abundance on the pitch, both sides narrowed their formations – 4-4-1 and 4-3-2 – accordingly. Therefore, as intelligent use of the full-back overlap as possible was going to be a key factor in this game, and in the 32nd minute, Aachen nearly showed why: Schmidtgal was fed on his burst to the byline, and dinked a cross to the back post where Christopher Nöthe was lurking. However, there was too much pace and height on the ball, and the in-form attacker could only head it into the side-netting.

Knowing that they’d end up playing three-quarters of the game with ten men, the pace of the passing and attacking from both sides was now significantly reduced. When Fürth’s pass-assessing centre-backs had possession in their favoured ten-feet-from-halfway part of the pitch, they found it more difficult to splice Aachen apart. The hosts positioned a narrow wall of three (Radu and the wingers) on halfway itself, with the two centre-midfielders also narrow behind them. This smothered the two Fürth wingers and Fürstner, who bobbed around the centre-circle looking to collect the ball. Meanwhile, the width-providing full-backs weren’t necessarily the best feeding option, as Aachen were standing a wider bank of four defenders high up the pitch – thereby eradicating the midfield-defence corridor where the Fürth strikers were looking to collect the ball and work with it, while also giving Schmidtgal and Bernd Nehrig no chance to pick up pace if/when they received the ball from either Thomas Kleine or Mergim Mavraj.

Ralf Außem, meanwhile, changed the line-up of his attack as we entered and contested the final ten minutes of the half, stationing Odonkor as the central striker and putting Radu on the right wing. Although his side kept possession far better in the second quarter of the game, this was mainly because they were playing far more shorter and sideways passes, keeping the Fürth rearguard very un-spliced, and ensuring the sides would come out for the second half with the deadlock still to be broken.

Aachen started the second half with Odonkor up front, although it was down the flanks where both teams looked to attack during a positive and open start to the final 45 minutes. Nöthe ruined a fantastic chance to open the scoring in the 48th minute, greedily slicing a shot over the bar – much to the disgust of one or two of his colleagues, who’d picked up better shooting positions – after a defiant and skill-laden one-man counter-attack. The break came from a poor Hadouir corner, although it wasn’t all bad from the Dutchman at the start of the new half, as he finally began to get more involved on the ball in open play and ask questions of Nehrig. 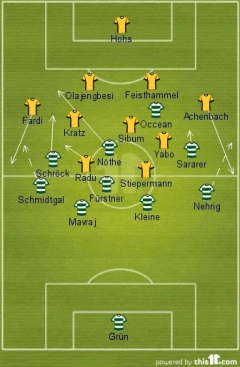 The formations as we entered the final ten minutes of the game.

The hosts’ banks were still being positioned as high as was possible, and were always compact. This continued to make life difficult for Fürth, and the high-flying visitors grew ever more sloppy in their approach play. The small band of travelling fans still sang their hearts out, though, as their team – now in a 4-1-3-1 with Nöthe standing in a bank with the wingers – just about managed to see more of the ball than Aachen. Although the home team had in Bas Sibum a man very eager to get on the ball and make things happen, it just wasn’t happening for them in the final-third, and Odonkor was wasted in the centre. Sercan Sararer really should have made them pay in the 59th minute when running at an uncertain defence with the shooting angle in his favour, but his right-footed effort which beat Hohs was about a foot away from the ‘keeper’s right-hand post.

Three minutes later, Hadouir jinxed his way infield, dragging Nehrig with him and winning a free-kick off the right-back just off the D. The Dutchman took it, and forced a fine, flying save from Grün with the right-footed strike having looked seemingly certain to nestle in the top left-hand corner. The winger was replaced in the 67th minute by Reinhold Yabo, but Aachen kept the pressure up. Two minutes after the change, centre-back Seyi Olajengbesi shaved the post with a header from a corner. The substitution was a way of Auβem looking to keep Aachen’s foot firmly in the game, as Yabo went onto the left-side of a three-man midfield in the team’s 4-3-2. Odonkor also made way for a fresh pair of legs in the 76th minute, as Marco Stiepermann took his place.

Both sides had chances in the closing stages, with wasteful finishing and good defending ensuring that neither net was rippled between the posts. Although the draw brings Fürth’s winning run to an end, they’ll look back on this as a well-earned point,as Aachen had more than their fair share of chances in the second half. As for the home team, they’ll need to take things one step at a time if they are to step out of their current predicament, but with this result – combined with Bochum being hammered at home by Paderborn – lifting them off bottom spot, a portion of the doom and gloom surrounding Alemannia Aachen has now been lifted.