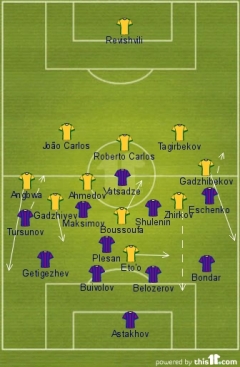 A general depiction of how the sides were set up during the first half.

Samuel Eto’o scored on his home début for new club Anzhi Makhachkala, as the big-spending Dagestani side moved up to fourth place in the Russian Premier League. The home side never looked convincing against a defensively dogged and sprint-pressing Volga outfit, who themselves offered nothing in attack. There were occasional flashes of invention from some of the players you’d expect to see them from, but generally, Anzhi’s play was sluggish, their passes sideways, and their spirit conspicuous only by its absence. Nevertheless, the three points are ultimately all that matters, and Anzhi need to make up four of them to overtake CSKA Moscow in the third and final Champions League spot. Volga, on the other hand, are now just one point above the drop zone.

Volga instantly sat off their illustrious opponents, letting the home side dictate the tempo and monopolize possession. Anzhi attempted to work their way towards goal with floor-based football from the word ‘go’, and some of their initial play – started via Roberto Carlos and brought into the opposition half mostly by Benoit Angbwa – was slick. But, Volga looked potent and quick on the break, especially Sanzhar Tursunov on the left. However, in the third minute, it was Andrey Eshchenko who zoomed down the right, before the ball was switched for the tricky Tursunov to make a one-two with Mate Vatsadze. The Georgian forward had other ideas, though, and instead of returning the pass, teed up Romanian midfielder Mihăiţă Pleşan. Pleşan’s first-time blast deflected off centre-back Rasim Tagirbekov, and went into the net for a 1-0 Volga lead!

Unsurprisingly, Volga made no attempt to creep up the pitch as a collective unit once they had the numerical advantage. Instead, they sat back deep in their own half, forcing Anzhi into an endless series of sideways passes. This was partly because in their own half, Volga pressed furiously, narrowing the angles in a bid to stop anything fancier than a short and simple lay-off sneaking through. Thus, in the seventh minute, Yuri Zhirkov decided to mix things up, and his head-down dribble to the byline and cross resulted in a corner (which Vitali Astakhov zoomed out to slap away).

Realising that the former Chelsea man was onto something, Anzhi started to pummel the box with crosses from the second-third area of the pitch. The visitors were given a few nervous moments by these, particularly because of Astakhov’s gung-ho approach to dealing with them, and also due to Mbark Boussoufa’s well-timed ghosts.

Samuel Eto’o was, at this point, feeling his way into the game (well, that’s a kind way of putting it). But, in the 16th minute, he showed why he’s one of the best attackers in the world by grabbing the Anzhi equalizer. The incision was made Zhirkov once again; the left-sided midfielder this time running diagonally from the chalk towards the D. He laid the ball off for an Ahmedov strike, which was mishit, and landed at the feet of Boussoufa. With the Volga defence preparing to run out to block the original shot as a tight line, the Moroccan midfielder had space. However, next to him in even more space was Eto’o, who jumped back one way with the outgoing defence before darting back the other in the blink of an eye to take on Boussoufa’s pass, and calmly slot the ball home for 1-1!

In a six-minute spell after pulling level, both Anzhi centre-backs had headed chances from Roberto Carlos set-pieces. Then, in the 25th minute, a cross from the left found Eshchenko unattended at the back post, only for the right-sided midfielder to blaze the ball back across goal. Volga were able to get balls into the box like this on a number occasions, as there was often a big gap and lack of communication between the hosts’ defence and midfield banks. The piano-carrying Roberto Carlos was more often than not as deep as the centre-backs, while his sparring partner, Ahmedov, has attacking instincts and was acting on them.

Vatsadze wasn’t doing a bad job of holding the ball up given how isolated he was, and Volga could have made more of their forays forward were several opportunities not wasted by Tursunov, who seemed determined to score from 25 yards out or more. As the half-hour mark came and went, the game was at a point where Anzhi were finding it very difficult to break their guests down. Volga continued to sprint-press one man at a time in their own half, and save for one or two moments of vision from Roberto Carlos or Eto’o (both of them using the clever off-ball runs through chinks by Zhirkov), Boussoufa, Ahmedov & co. were stuck passing the ball about sideways around halfway.

Anzhi’s other tactic to overcome the seemingly impenetrable walls, early crosses, were also now coming to nothing, because Boussoufa was coming deep, and Eto’o’s wasn’t willing to make death-defying charges onto high balls where the odds weren’t in his favour. The striker picked up a yellow card in the 37th minute for a high foot, before firing a free-kick just off the D into the wall six minutes later; and that, was about as exciting as it got as the half drew to a close. Ali Gadzhibekov cut in from the left in the 42nd minute and his fierce shot resulted in an Astakhov spill, but there was no one there to pounce on the rebound – Eto’o, like the run-from-deep wanting Zhirkov and ball-seeking Boussoufa, was too far back up the pitch to respond.

As for Volga, they had lessened their energy levels and were committing to attack far less during the final ten minutes of the first half, although on the one or two times they did get forward, Anzhi defended strongly and intelligently, corking the threat (of Eshchenko in particular).

Although Boussoufa made a dynamic start to the half, the rest of his team-mates took a while to get going again. The Volga players knew their defensive duties and were happy to stick to them, so the opening five minutes were light on action and excitement. However, as we went beyond the 50-minute mark, Anzhi began to up the tempo a bit. With Volga still pressing furiously in their own half, the likes of Eto’o and Zhirkov began to show the sort of agility, acceleration and touch that makes them a step up from your average Russian Premier League player. However, stringing team moves together in the final-third was still proving difficult, as the aforementioned two players weren’t feeding colleagues as good or clever as say, Lampard, Stanković, Maicon or Ashley Cole, to advance the move. 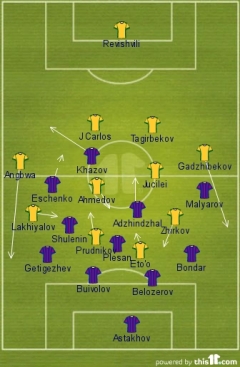 The formations in the closing stages of the game.

Angbwa and Roberto Carlos, who’d looked good in flashes, were getting sloppy in their crosses and long-range passes respectively, and although Boussoufa was finding space in the final-third, it was always on the wings (thus depriving Anzhi of an Eto’o-flanker). After a break from the hosts in the 54th minute, Volga booted the ball clear towards the D. Vatsadze gave chase, and managed to hold it up for a good five seconds in the box despite the attentions of João Carlos. By the time the striker had decided enough was enough, his spin and shot which trickled wide coincided with a team-mate at last reaching the box to offer him support.

This lack of support for the young Georgian was because the attacking midfielders were having to do their work alongside the full-backs; as epitomised by Aleksandr Shulenin in the 57th minute, when he hacked down Makhach Gadzhiyev on the wing. Roberto Carlos pelted in a characteristic daisy-cutting free-kick diagonally towards the near post, but Shulenin, as if trying to atone for the foul, stuck a leg in to block the ball’s path. However, the midfielder succeeded only in diverting the ball past his disbelieving ‘keeper. Anzhi, somehow, had a 2-1 lead!

The goal opened the game up a little bit, with the sides exchanging numerous several-player surges forward. The visitors won a free-kick just in front of the right-sided corner flag in the 66th minute, and Tursunov outswung a low – and poor – right-footed free-kick. Roberto Carlos, the first man, took his eye off the ball and booted air, thus allowing Andrei Buivolov to get a shot off. However, despite having very little to do all game, Revishvili had his wits about him, and was down low to smother the ball.

As we entered the final 20 minutes, though, things had calmed down, and it was back to Volga playing on the break, and Anzhi having the territory and possession and finding their attempts at intricate football being smothered. Tursunov was replaced at this point by Nikita Malyarov. He went onto the right-hand side, meaning that Eshchenko moved out to the left. The visitors seemed to be showing signs of fatigue, and they nearly paid the price for doing so in the 72nd minute when Ahmedov responded first to a bouncing loose ball in the D to shave the right-hand post with a fierce drive.

Zhirkov, Eto’o and Boussoufa soon began to interchange and pick the ball up in areas that were anywhere but the box once again, although being as they had the lead, this wasn’t as detrimental as it had been in the first half (Volga’s defenders were now having to follow whichever of the trio had the ball in numbers, and this left gaps for others such as Gadzhiyev and Angbwa to exploit). Gadzhiyev and Roberto Carlos were replaced as we entered the final ten minutes, Alexander Prudnikov and Jucilei taking their places. Volga had made their final two substitutions, meanwhile, replacing Ilay Maksimov and Vatsadze with Anton Khazov and Ruslan Adzhindzhal.

There was good attacking energy being shown by both sides during the final five minutes, with Boussoufa the talisman in one half of the pitch, and Eshchenko, playing off Khazov, driving Volga’s cause in the other. Players such as Jucilei added vision and discipline in possession for Anzhi at a time in the game when they needed it, while Prudnikov was putting his body on the line so as to ensure that Eto’o didn’t have to. Shamil Lakhiyalov replaced Boussoufa in injury time, but there was little of the game left for him to make any sort of impact, as Anzhi comfortably held on.