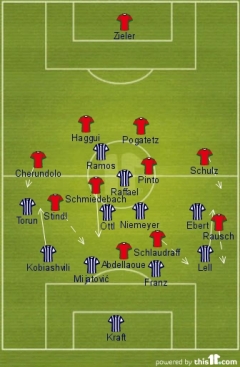 Hannover returned to the top of the Bundesliga table after drawing 1-1 with Hertha Berlin, but the Lower Saxony side will feel aggrieved that they dropped two points after referee Robert Hartmann ruled out a late winner. Negative Hertha deserved to go in at the interval 1-0 down, although Hannover lacked the creative spark that would have seen them put more goals past their lacklustre opponents in the opening 45 minutes. The visitors changed systems three times during a rejuvenated second half performance, and despite still not looking overly convincing, they did start to create chances thanks to a more positive mentality against a home side who tired after Thursday night’s 2-1 win over Sevilla in the Europa League. Perhaps a draw wasn’t a fair result on the balance of play, but Hannover didn’t create enough chances of note in the second half to win the game, save for a late Christian Pander free-kick which did sail in, but was ruled out for what appeared to be shoving in the box (however, it could have been due to the fact that the free-kick was given as indirect).

Mirko Slomka started the game with the XI that defeated Sevilla on Thursday evening, while Markus Babbel deployed the same side which lost in round one to Nuremberg (save for Raffael being picked ahead of Pierre-Michel Lasogga, thereby giving the former Stuttgart coach the option of a 4-4-1-1). It was the former coach’s side who made the early running, holding the territory in the opposition’s half but failing to make any penetration in the final-third due to the good pressing and disciplined bank-forming/holding of Hertha (in their off-ball 4-4-2). When the visitors did disrupt the sideways passing of the hosts’, they broke via playmaking Brazilian Raffael, who only really had one option ahead of him in the roving Colombian forward Adrián Ramos.

While Hertha countered sharply and made the right passes to get into the final-third, they seemed more determined early on to haul Hannover out of their own half than attacking Ron-Robert Zieler’s goal, and when Levan Kobiashvili swung a cross into the box in the sixth minute, hurried due to good Hannover pressing, there was no man in blue and white in the box to attack the ball.

But by and large, the ball was Hannover’s to use and lose in the opening ten minutes, with Konstantin Rausch at the heart of everything, be it dribbling head-down or making cute and sharp little one-twos, drawing fouls or making the return pass every time, such is his acceleration. Sérgio Pinto swung in one of the free-kicks his left-wing colleague won in the ninth minute, and the fantastic delivery reached Karim Haggui six feet away from the back post. The centre-back headed the ball towards the top right-hand corner, but Thomas Kraft was equal to the effort, parrying the ball over the bar.

‘Iron’ Maik Franz received an arm in the face in the build-up to that corner, the bloodied centre-back leaving the pitch for treatment as Hannover went short from the set-piece, teeing-up Rausch to try an – off-target – shot at the near post. As has come to be expected from Babbel’s Hertha so far this season, the game was slow, bitty, niggly and devoid of invention (despite the best efforts of Rausch and Jan Schlaudraff). The Berlin outfit were far too content to sit off in their 4-4-2; the defence particularly deep and the midfield and forward banks flat and nearer the halfway line.

Although Slomka’s players sought to exploit this large-ish midfield-defence corridor, Lars Stindl making diagonal off-ball runs to take the ball in the space and Manuel Schmiedebach probing and seeking behind the strikers (Pinto sat back as the Raffael-guarding defensive screen), they were crying out for a natural playmaker to be sitting in and utilising that space. As talented as Schmiedebach is, the youngster is a centre-midfielder at heart, and Stindl is a hard-working wideman (and a good one at that). Schlaudraff was his usual well-timed running self, but the former Bayern Munich man is at his best when making last-shoulder runs. Unable to get someone on the ball to feed Thursday night’s hero, Hannover were moribund in the final-third during the opening 30 minutes.

Even when we’d gone beyond the 25-minute-mark, Hertha’s own (counter-)attacks still seemed to be more focused on dragging Hannover back than calling Ziegler into action, but perhaps one might credit Hannover for keeping it this way – Slomka’s side have that wonderful knack of pressing hard in their own half whilst keeping their banks narrow and close together, although an overlap from Christian Lell did see the visitors win a corner (which led to an offside effort on goal from the second ball).

Was referee Robert Hartmann a bit too whistle-happy? Well, he wasn’t helped by the players on either side, who thought nothing of making shoulder barges or leaving legs in. Franz and Schlaudraff were having a running battle with one another during the first half, and this gradually impacted on their contribution to the game of football (the latter in particular).

But, in the 33rd minute, Schlaudraff’s striking partner, Mohammed Abdellaoue, showed that he was still focused on the game, winning a free-kick 25 yards out from goal after dropping back to join in with play on the left flank. Pinto zoomed up to the set-piece, and right-footed a daisy-cutting thunderbolt into the bottom left-hand corner for 1-0! Thomas Kraft must take some of the blame despite the ferocity and awkward bounce of the strike, as Hertha’s two-man wall offered no protection to the former Bayern Munich custodian. However, a clever run from Schlaudraff helped create space in the build-up, so take nothing away from Slomka and his coaching staff for putting in the work on the training ground to create such ideas.

Two minutes later, Pinto had another free-kick from a similar position (ten feet or so from the left strip of chalk), albeit this time nearer the box edge. On this occasion, however, Kraft constructed a five-man wall, and the Portuguese midfielder walloped it high and wide. The hosts had rediscovered their energy and need to focus on the game having taken the lead, and began to exploit that gaping defence-midfield corridor being left by Hertha. The onus was now on the visitors to take the game to Hannover, but the men in red pressed the piano-carrying centre-backs high and hard, ensuring regular turnovers.

Hertha themselves were looking to press higher up the pitch when Hannover started short, the wingers and Peter Niemeyer now getting involved too. Yet there was nothing they could do to level the scores before the interval and alter Babbel’s half time team talk, meaning that the young German coach still had his work cut out in the second half. It was Hannover who so nearly added one more goal before the break, coming when disciplined line-leader Abdellaoue flicked in a superbly deceptive though-pass to Rausch in the 42nd minute; the winger just failed to get a shot off from inside the box following a clever burst.

The formations for the final ten minutes. Hertha equalized in the 83rd minute.

There was far more urgency and attacking intent to Hertha’s game at the start of the second half, as the wingers stood as high as Ramos, looking to be fed over the top of a very narrow and flat Hannover back four. Niemeyer, meanwhile, was injecting more energy into the heart of the midfield, winning back possession and shifting the ball upfield at greater pace, as Hertha began to make more forward and positive passes.

Hannover continued to press their guests high and hard, always looking to stand their defence as near to the halfway line as was physically possible. Yet by keeping the wingers high and the full-backs overlap-minded, Raffael was able to play with more of a free role, popping up to receive the ball in whatever space was available. When he won a right-sided corner in the 53rd minute, the visitors had a great chance at getting back into the game, but Patrick Ebert’s right-footed outswinger was woefully underhit.

Undeterred, the away side continue to come forward, with Ramos too upping his diagonal darts across the final-third. However, Hannover are good at deploying their offside trap, and therefore continued to keep Ziegler untroubled. Despite some attempts, Hertha just didn’t have the players capable of making short and sharp triangles that would have broken the narrow Hannover defence down, hence their predictable attacks remaining fruitless.

On the hour-mark, we saw one change apiece. Abdellaoue, who was beginning to look tired and lethargic after playing the whole 90 minutes on Thursday night against Sevilla, was replaced by Didier Ya Konan. And the ineffectual Torun, who had just received a booking, was replaced by Lasogga. Babbel changed to a Christmas tree system (Ramos and Raffael behind Lasogga), although Hannover sought to exploit flank gaps on a lop-sided use of the formation by attacking down the Hertha left flank – i.e. Hannover’s right – space in particular; holding up play with Rausch and Schlaudraff on the left, before switching suddenly to Steve Cherundolo’s darts from right-back.

Ya Konan had injected fresh ideas and energy into the Hannover frontline, and it was the Ivory Coast international’s diagonal dart across the defence that saw his headed lay-off to Schmiedebach open a hole for the 22-year-old to trap and shimmy one way before shaping up to shoot on his right foot; curling a seemingly top-corner-bound shot narrowly wide in the 67th minute.

Driven on by Niemeyer and Ebert and Ya Konan respectively, the two sides were contesting an end-to-end game as we entered the final 25 minutes. Rausch, who had faded, was replaced by Pander in the 68th minute. Babbel, meanwhile, took off Niemeyer, replacing him with Nikita Rukavytsya. The Hertha coach had at last seen sense, and realised that the bizarre 4-3-2-1 (which had at least started to cover the left-hand side a bit more) was also being targetted for its lack of width down the right-hand side too, as Ya Konan went about isolating or exposing Lell. After coming on, Rukavytsya was now the left-winger in a 4-2-3-1, with Raffael alongside Ottl and Ebert back on the right.

And it was down the latter flank that Hertha produced the best move of the match and their 83rd minute equalizer. A quick and clever one-two with Ebert drew two men onto the midfielder, giving him the chance to feed Lell’s dart to the byline. The subsequent square was about half a foot off the ground and sharp as could be. But the movement and finish by Lasogga was world-class – the Germany U21 striker getting across Haggui thanks to an impeccably timed run, and then adjusting his standing position entirely half a second before connecting with the right-flank cross to cushion it into the bottom left-hand corner with his left foot from the near post. The young substitute had both made his point and the scoreline 1-1!

It was all Hertha in the immediate aftermath of that goal, with Ramos delaying on a glorious opportunity to make it 2-1 in the 87th minute, before forcing Ziegler into an excellent save one minute after that. But so topsy-turvy were the closing stages, that in the 89th minute, a left-footed free-kick cross from Pander went straight into the net. However, referee Hartmann, who had infuriated both coaches’ and the fans with his needlessly fussy and overly-officious approach from first minute to last, ruled out what would have been the winner. The man in the middle was given a mouthful by Hannover officials and Schlaudraff as he left the pitch (the young referee played no real injury time), but perhaps the hosts should have been thanking God that Ramos didn’t convert one of his two late gilt-edged chances to make it three points dropped rather than two.