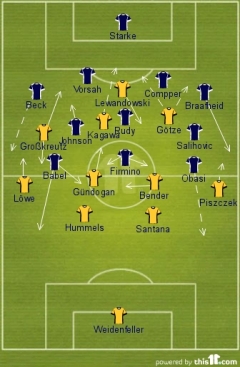 The formations in the first half, which Hoffenheim won 1-0.

Tactically adventurous Hoffenheim deservedly beat champions Borussia Dortmund, who put in a performance bereft of energy, imagination, confidence and precision. Jürgen Klopp’s side have now lost 1-0 at the Rhein-Neckar Arena twice in the space of six months, but the credit must go to the seemingly staunch-4-4-2 man Holger Stanislawski and his players, who showed discipline, zip and tremendous spirit to decisively earn their first three points of the new season.

If you were being cruel/brutally honest, you would suggest that Hoffenheim coach Stanislawski sent out a side consisting of one goalkeeper, five defenders and five midfielders. His desire to squash the space in the middle of the park immediately became apparent, as BVB took advantage of the hosts’ settling-in period to get a through-ball behind Hoffe into the final-third. However, Hoffe were full of beans, charging back as a unit to flood the box and block two crosses. And after that early scare became a distant memory, it was clear to see that Stanislawski had actually set his players out in a width-laden 4-3-3: one which used interchangable attackers, overlapping full-backs, and midfielders capable of playing swift and incisive passes upfield.

And, to be fair to Hoffenheim, they started the game far more comfortably than BVB, having a bit of early luck attack-wise mainly through hitting long balls over the top of the centre-backs; Felipe Santana, in particular, was forced into a number of last-ditch clearances. But it was the interchangability of the attackers which created the game’s first chance, coming when Ryan Babel laid a two-yard pass on to Roberto Firmino in the D in the sixth minute, the Brazilian then crashing a shot off the underside of the bar as shell-shocked BVB stood off.

Unhappy with what he was seeing, Klopp urged his players to take the sting out of the game and find their rhythm; cue the yellow-shirted champions knocking the ball about at the back and giving their midfielders a touch, easing nerves and keeping Hoffe at bay. But the pace at which the away side moved the ball was so pedestrian, Hoffenheim were able to harry and hound high up the pitch with ease, forcing several successful turnovers. And, on one, which resulted in Chinedu Obasi easily burning rookie left-back Chris Löwe and putting in a cross that was cleared, the hosts took charge of the loose ball, resulting in a passage of play that was eventually halted when İlkay Gündoğan hacked down Firmino. Despite the centrally-located set-piece being 25-yards out, Sejad Salihović confidently zoomed up and sent a left-footed bullet into the top right-hand corner for 1-0!

Stanislawski’s 4-3-3 was not only attack-minded, it also boasted tactics clearly grasped by his players. The decision to play right-back Fabian Johnson in defensive-midfield looked inspired in the opening quarter-hour, as it allowed Andreas Beck to bomb forward when the time was right safe in the knowledge that he had someone there to cover him. It was this interchangability all over the pitch that enabled Hoffe to keep up their high-tempo pressing game – they were doing a Dortmund on Dortmund!

Yet in spite of all this, the quality-laden visitors almost snared an undeserved equalizer in the 16th minute. It started when Robert Lewandowski showed power, agility, acceleration and intelligence to spin Isaac Vorsah and pull-back from the byline – to the relief of the blue-shirted fans in the Rhein-Neckar-Arena, Marvin Compper got a crucial leg in the way to stop Shinji Kagawa from scoring a tap-in. As we reached the 20-minute mark, Hoffenheim had begun to sit deeper and press less. BVB were seeing more of the ball, although their only notable chance in the five-minute spell following Kagawa’s came from a Mario Götze corner, cleared following Hoffe deploying their set-piece man-marking system to good effect. They were greatly aided, however, by the fact that Dortmund looked sluggish and bereft of ideas. Despite Hummels and Santana offering more oomph at the back and surging forward on libero runs as time went by, so many BVB passes – either the piano-carrying ones, second balls back into the box, crosses or through-balls – were overhit, underhit or made too late, and there was no spark from any of the attackers who normally carry it by the bucket-load.

Hoffenheim’s trio of forwards, on the other hand, did possess a fair dose of magic. Folding back into a corridor-restricting 4-3-3 in their own half when out of possession, Babel, Firmino and Obasi spread out in a flash as soon as their side won the ball back, forging their way up the field as a unit via first-time passes that dragged the Dortmund defence this way and that, making it nigh-on impossible for them to form their desired shape. I’d go as far as to say that Klopp had been taken to the cleaners, tactically, by Stanislawski in this opening half-hour, but that perhaps would overlook the fact that a system like Hoffenheim’s is far easier to enact if you’ve take an early lead (from a set-piece), and also the fact that there was a lethargy that rendered Dortmund unrecognisable from their usual sharp, swashbuckling, inventive and relentless selves. The curse of the pointless midweek international friendlies striking?

On the half-hour, BVB did at least force Tom Starke into action, but as if to epitomise their paucity of invention, the effort came from a long-range Kevin Großkreutz strike (which the ‘keeper duly palmed to safety). Dortmund did, at least, mix things up formation-wise during the last quarter-hour of the half, operating with more of a Christmas tree (Großkreutz dropping in alongside Sven Bender and Gündoğan), presumably in the hope of getting Lewandowski involved by having two attackers nearer to him. But although Götze’s off-ball runs and dribbles asked one or two questions of the Hoffe defence, the most notable action of the half for him was picking up a yellow card for petulantly and seemingly deliberating leaving a leg in on a challenge with Salihović.

His side were, by and large, so predictable attack-wise during this period of the game. Their threat down the channels, as it had been in the preceding half-hour too, was non-existent, and although it would be easy to pick on Löwe by saying that Marcel Schmelzer was being missed, Łukasz Piszczek was anonymous in the first 45 minutes; both unwilling and unable to do anything to pierce Hoffe’s wide but tight 4-3-3. The 2010/11 champions went in at the break 1-0 down, and although that was about fair given the limited number of chances Hoffenheim had on goal, 1-0 does not really explain just how bad Klopp’s side were.

The systems in the 75th minute.

There were no substitutions for the second half, which started at no great pace. Dortmund were back in their 4-2-3-1, and Hoffe were sticking to their 4-3-3 guns. Although the away side made more of an effort to play a calmer, pass-based game in their opponents’ half, designed to help keep Hoffe back and Dortmund high, the hosts were always dangerous on the break, getting out of jail via Firmino more often than not. The Brazilian showed on  numerous occasions his ability to hold off his man, before picking out the right through-pass to one of several final-third-bound blue-shirted players. Yet in the 53rd minute, it was Firmino himself who so nearly doubled his side’s lead, the deep-lying false forward timing a disguised ghost to perfection, and attempting to catch Roman Weidenfeller off his guard by half-volleying early. The experienced custodian read the idea, parried the ball for a corner, and for the second time in the half, Hoffe wasted such a set-piece by trying to go short.

Enough was enough for Klopp, and ten minutes into the half, the magic G duo of Gündoğan and Götze were hauled off; Ivan Perišić and Kuba respectively taking their places. The former went onto the left wing, the latter the right, with Großkreutz dropping into the centre of midfield. Klopp deployed more of a 4-4-2 system thereafter, moving Kagawa into a striker-like position alongside Lewandowski (in the hole, the Japanese international had had no room to work with given that Rudy and Johnson were so near to their centre-back colleagues), and encouraging his full-backs and wingers to team up and hit their hosts via a two-sided wing assault. As Stanislawski had narrowed his defence, Klopp’s alterations were wise. Kuba’s ability to go inside and out gave Edson Braafheid more to think about, and this, in turn,  ensured that there was more room Kagawa and Lewandowski to play with in the box.

Dortmund began to turn the screw, and in the 64th minute, Perišić headed a left-footed inswinging Löwe corner against the frame of the goal. One minute later, Stanislawski decided it was time that he too changed his formation. Off came Salihović, replaced by Peniel Mlapa, who went out onto the right wing of a 4-4-2. Keeping Babel and Firmino high to press the piano-carrying Dortmund centre-backs, Stanislawski kept the two banks of four that preceded the strikers just under halfway up their own half, little more than ten feet apart. He introduced an actual centre-forward as we hit the 70-minute mark, however, Sven Schipplock replacing Firmino. The former Stuttgart striker instantly linked up with Mlapa, the pair sloppily and fortunately one-two’ing their way into the box, only for Schipplock’s eventual power-strike to loop over via the thigh of Santana. Rudy’s right-footed inswinging corner was cleared, and it was back to Dortmund doing the dictating.

Klopp, warned by referee Deniz Aytekin to calm down, replaced Kagawa with Mo Zidan in the 75th minute, seemingly looking to replicate the impact made by Schipplock, who had given Hoffenheim enterprise, energy and a willingness to take responsibility all over the final-third. But as time marched on, Dortmund were pretty much throwing the kitchen sink at their hosts, Piszczek’s long-throws being a key feature of their attack.

With Kuba keeping Hoffenheim stretched on one right wing and Mlapa doing the same to Dortmund on his side’s right flank, both BVB and Hoffe each had their chances in the final quarter-hour. Stanislawski stuck with the 4-4-2 for the remainder of the game, bringing on Sandro Kaiser in place of Johnson to inject more energy into the defensive-midfield position. Klopp’s side, on the other hand, lost their formation as we approached and went into injury time, stationing as many bodies in the forward line as they could get away with. No one in yellow could score, however, thus ensuring that Stanislawski made a perfect start on his home debut as Hoffenheim coach.