The stakes couldn’t have been higher before this one. Fifteenth-placed Wolfsburg, who knew a loss would set a new club record of five straight defeats, faced bottom-placed Gladbach, who won against Schalke last time out with a new coach in charge. And although that was his first game at the helm, this encounter was no doubt just as important to him – it was the first time Dieter Hoeneß and Lucien Favre (current VfL Wolfsburg sporting director and Borussia Mönchengladbach coach respectively) had come face to face professionally since their very public power struggle at Hertha BSC 20 months ago.

The Wolves came into the tie without several key players: goalkeeper Diego Benaglio (back), midfielder Josué (thigh) and striker Grafite (illness) were all out. Gladbach, meanwhile, were looking much better fitness-wise, and were relieved to hear that Marco Reus was fit to start following a knock to his heel.

The hosts used their foremost two players to press the ball from the off, but the visitors were content to hang back, and kick long for the dropping Mo Idrissou to flick on to one or two ghosting centre midfielders. Although Gladbach’s willingness to sit deep seemed to be playing into Wolfsburg’s hands because it let them flood into the opposition half with bodies urgently steaming forward, the final ball (even when played under no pressure) was often poor. Such attempts at these kinds of passes were more than I expected when the line-ups were announced, however – ultimately two 4-4-1-1s with defensive midfielders pulling the strings. But Pierre Littbarski granted his midfielders the freedom to interchange: Brazilian duo Diego and Cicero were especially keen to help one other out, with the latter pushing inside when the former wanted to work from the flank. On the right, Peter Pekarík was often higher than Sascha Riether. The movement was well choreographed, and the pressure it helped maintain nearly paid off in the eighth minute when away side defender Dante unintentionally headed a crossed free-kick onto his own post.

With Roman Neustädter placed in front of the centre-backs in a bid to cork Diego, Gladbach were being overrun in other areas of the pitch instead. It didn’t help that Diego was essentially playing alongside Dieumerci Mbokani when not floating out to the flank, thus leaving Favre with a non-creative midfielder twiddling his thumbs and preventing his side having an extra weapon in their counter-attacking arsenal. On top of that, the new Gladbach tactician wasn’t helped by the positional uncertainty infecting his side’s central defensive trio. In the 13th minute, Diego jogged towards the box with the ball glued to his feet, and not one player made an effort to close him down. Immediately after this chance went begging, Gladbach made a little show of pushing their banks higher and closer together.

However, their passing was wary, nervy, and the ball turned over. As Diego carried it at the defence, they sprinted back to their comfort zone, seemingly relieved to be getting back to familiar territory. The same happened again moments later – more pointless passes in the opposition’s half, Wolfsburg waiting to nick the ball, before scaring the guests into zooming back to Logan Bailly as Cicero beat Tobias Levels for pace with ease.

Although Wolfsburg were also playing with defensively-minded centre-midfielders, they were aided in an attacking sense by the confidence of their back four positionally. They came out and stood high when the time was right, and gave the players in front of them the confidence to creep further forward themselves. Gladbach put little pressure on the ball in the opposition’s half, and seemed more keen to kill the tempo of the Wolfsburg waves by letting them have it. Subsequently, Diego began spending more time in his own half than Gladbach’s – jogging or sprinting back to collect the ball, and pull the strings. However, despite their now being 25 minutes on the clock, the home side’s passing was still as bad as it had been in the opening stages.

Behind the scenes, Makoto Hasebe and Jan Polák were working hard to get the Brazilian time and space on the ball. But as one brief and shot-down Gladbach counter attack suggested, these extra shifts coupled with Wolfsburg’s wastefulness in possession made for opportunities to hit the hosts on the break. Alas, Gladbach are bottom of the league for a reason, and when Diego’s delicate little-toe flick pushed Riether clean-through in the box, Martin Stranzl’s clumsy bundle demonstrated why the visitors are favourites for the drop. Diego was recently suspended internally by the club for two matches after an on-pitch argument with Patrick Helmes over who should take a penalty. He took it that time, and skied it. He took it this time… and skied it!

The miss briefly spurred Gladbach into pressing the ball with a greater degree of urgency, yet they soon paid for their paucity of quality and lacklustre attitude in the 36th minute. Patrick Herrmann was far too casual in possession and got robbed in the opponent’s half. However, his colleague, Neustädter, made little effort to mop up the loose ball. After Stranzl rushed out and sold his rearguard colleagues short, Riether made a clever run from the right, before pulling the ball across the box to hand Diego the chance to redeem himself for that penalty miss.

Now 1-0 down, Favre opted to make an immediate tactical and formational change by replacing Neustädter with Thorben Marx, and flattening his side’s midfield (trying to ensure it exerted some form of influence on proceedings higher up the pitch).

Despite this switch, there was still an asphyxiating inertia to the away side’s game, and it was no surprise when Wolfsburg took advantage of it to go 2-0 ahead seconds before the interval. Polák showed far more hunger to bulldozer his way to a loose ball on the fringes of the final-third, the careless Stranzl impeded him, giving away a free-kick just off the D, which Diego curled in sumptuously. His side 2-0 up going into the break, Wolfsburg’s 23-year-old Swiss ‘keeper Marwin Hitz will never enjoy a quieter half of football again. 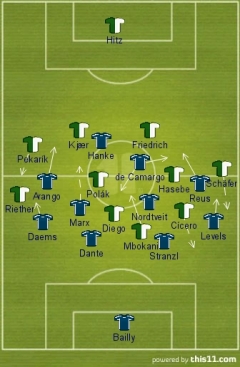 The systems in the 65th minute, with Wolfsburg still 2-0 ahead.

The second period began as something of a stalemate. Gladbach’s players, a rollocking fresh in their minds, were now in a new 4-4-2 (Igor de Camargo replacing Herrmann, and Reus shifting out to the right), and their defence had thrown off the shackles and stood as high as possible up the pitch, despite Mbokani’s best efforts top keep Dante pinned back. With Wolfsburg’s defence also continuing to stand high, there was a wedge of the pitch which encompassed the centre circle where all 20 outfield players congregated. The ball went nowhere and the game went nowhere, so it was time for one of the sides to seize the initiative and use the flanks. Via Marcel Schäfer, the Wolves did just that, and subsequently enjoyed a long passage of possession in the opposition’s half, the blue-shirted enemy pinned back just where they needed/wanted them.

The home side’s captain continued to cause havoc down the left, aided by the fact that de Camargo and Reus were interchanging (or forming a narrow ‘2’ directly behind the Cameroonian battering ram, Idrissou), and because neither are especially adept at defending. Comfy in their lead, Wolfsburg were able to calmly break down the increasingly frantic Gladbach forays forward (an hour in, and Hitz still had his pipe lit and slippers on). Getting Mbokani to jog back and teasingly hold the ball in his own half hindered Favre’s desire to enforce his philosophy on the game, as the back-line didn’t know whether to push on or stay rooted.

Perhaps seeing the marginal influence Mbokani was able to have in that small passage of play inspired Favre to haul off Idrissou and replace him with Mike Hanke (the ex-Wolfsburg attacker booed by the home crowd upon entering the field). Despite Hanke’s presence, it was another oaf up top who gave Gladbach hope in the 72nd minute. A long throw into the box saw Polák manhandle Stranzl, and the referee gave a penalty. Filip Daems made no mistake with his left-footed attempt from the spot, and Hitz at last had something to do – booting the ball in frustration up the pitch for a kick-off!

Just as the hosts’ missed penalty inspired the visitors to press with greater fury and intent, their own scored attempt did much the same. With Favre pushing his widemen higher up the pitch in a 4-2-2-2 system similar to the one used by the USA at World Cup 2010, the Wolves continued their left flank assault by veering between a 4-2-3-1, and playing Cicero in a flat forward-three system designed to exploit the gap still being left by Reus. But with Borussia Mönchengladbach now monopolising possession and dictating the tempo, Littbarski brought on Mario Mandžukić to lead the line and chase after the pass-assessing defenders.

His arrival might have counted for nothing had Reus had a bit more luck in the 80th and 81st minutes – one shot deflected agonisingly wide, and another, a volley, drawing a superb save from Hitz (three minutes later, a similarly ferocious right-footer from Håvard Nordtveit drew just the same reflex reaction). After profiting from Favre’s use of a deeply deployed centre-midfielder in the first half, the Wolves were now using their own – Hasebe acted as a net to his midfield colleagues, and a guard dog on a lead for the defence. He did his job, his team just about held on, and Littbarski finally has a win under his belt.