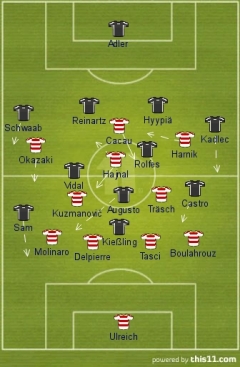 Bayer Leverkusen defeated relegation-haunted Stuttgart in a hugely entertaining game at the BayArena. Stuttgart will feel hard done by after putting in a positive performance both in and out of possession, but Leverkusen’s quality in front of goal helped them seal all three points.

Both sides came into this game on the back of midweek Europa League dates (Bayer beating Metalist Kharkiv 4-0, Stuttgart going down 2-1 to Benfica), and entirely different Bundesliga narratives. For Die Roten, a win wouldn’t lift them up the table, but would take them to within a point of the team perched just above the relegation zone, Wolfsburg. Leverkusen knew a draw would be enough to lift them above Bayern and back into second spot. However, for a team looking so well placed to finish in the top three, the Werkself hadn’t been great at home, recording just four wins at the BayArena all season. Luckily for Jupp Heynckes’s side (who at this point last season, were still unbeaten), Stuttgart had only triumphed once on the road all season. Saying that, that 3-2 win had come in their last away game at Gladbach. But, saying that, Gladbach are bottom, had been beaten 7-0 by Stuttgart earlier on in the season, and Leverkusen cruised to a 4-1 victory against their guests for this game at the Mercedes-Benz Arena back in September. Bruno Labbadia’s side were missing a whole host of players too, including key attackers Ciprian Marica and Pavel Pogrebnyak, midfielder Christian Gentner, and flying full-back Arthur Boka. The former Hamburg and Leverkusen coach’s only attacking option on the bench was 22-year-old Sven Schipplock – a tall, weighty striker, but one with only five first-team appearances under his belt, four shots, and no goals. Leverkusen, on the other hand, were only shorn of Tranquillo Barnetta: Michael Ballack and Erin Derdiyok had to settle for places on the bench.

Both sides (in identical 4-2-3-1 formations) looked to play some nice football early on, and without the ball, pressed furiously and high up the pitch. Stuttgart looked slick and sharp – Tamás Hajnal and Cacau exchanging cute early passes and positions, the Germany international striker then trying an audacious chip which René Adler did well to tip over the bar. It appeared Leverkusen were on the back foot against their confident, pass-spraying guests, but football can be a cruel game, and it was the home side who struck against the run of play after just four minutes. The ball was pushed out to Sidney Sam on the right, and Christian Molinaro got too close to the pacy winger, who showed a quick flash of acceleration to pull the ball back across the box. Gonzalo Castro’s subsequent mishit actually worked in his side’s favour – drawing the two centre-backs across, and landing kindly to the now-free Stefan Kießling for a tap-in.

Stuttgart kept attacking after the goal, and stayed true to their footballing principles by keeping the ball on the floor, and committing scores of bodies into the opposition half. They worked hard off the ball too, but relaxed by the early goal, Leverkusen’s class began to show. Aided by Stuttgart’s rigorous determination to keep their back-four narrow (and Shinji Okazaki’s task of pressing high and fast further up the pitch), Sam and Renato Augusto began to cause havoc down the right flank. Despite showing less urgency on the ball than their guests, Heynckes’s side continued to press the ball back to Sven Ulreich. But Ulreich’s outfield colleagues were rewarded for their determination and energy when Martin Harnik was sent through the D in the 15th minute. The Austrian striker, who played down the road at Fortuna Düsseldorf a few seasons ago, showed strength and composure to hold off Stefan Reinartz and beat the oncoming Adler for 1-1. Credit to on-loan Dortmund man Hajnal for the perfectly-weighted releasing pass – the Hungarian international looked at home amongst Stuttgart’s fluid and foremost attacking four.

Post-goal, Labbadia slotted his banks nearer to their own goal, with Hajnal sprinting after the pass-assessing defenders, Cacau mucking in and biting at Simon Rolfes when the chance presented itself, and Okazaki keeping tabs on Sam, who was now looking for more opportunities to cut infield. Bayer were bossing possession, and like their guests, looked to use it on the floor. Their two central-midfielders were key in this tactic, carrying with gusto, and looking to slip in an overlapping full-back or one of the ball-hungry attackers where possible. But the away side pressed with intelligence, ferocity and discipline, and forced high-flying Leverkusen into more ambitious uses of the ball. This was epitomised when Sam made a dart behind all four defenders to the left-hand side of the box, and sent a shot gliding across goal.

Yet as time marched on, Stuttgart settled into their new role – one of the away side looking to play on the break – rather well. Hajnal and Okazaki were putting in great ball-winning shifts, and the former was picking out Pirlo-esque passes. However, there was a new cynical edge to their forays forward, which saw them halt slightly when in the final-third; more of a determination to draw Leverkusen’s outfield players back into their own half than test Adler while there was more space to unleash a shot, or pick out a through-ball. It was clear that Stuttgart saw the best chance to test Adler was when pressing and then nicking the ball in the opposition half. Half-hour in, there were still two or three players sprinting after the centre-backs on the ball, wearing the home side down, drawing the likes of Renato Augusto back into their own half, and forcing mistakes. The hosts tried to use this to their advantage by delaying the pass out from centre-back, drawing the guests higher up the pitch, and then scooping over for the lightning-quick Sam to chase. However, with only Kießling primed to receive a cross in the box, Stuttgart were able to send Matthieu Delpierre out to assist Molinaro in halting Sam. The Italian nearly ruined his side’s good work in the 36th minute though when a weak attempt at a through-ball allowed Leverkusen to break from a free-kick with three men to the away’s side two. Unfortunately, Sam’s decision-making isn’t his greatest asset, and the attempted pass sideways wasted what was a golden opportunity.

Yet in spite of the pressure Leverkusen’s players found themselves under when in possession, they generally held onto the ball well. Resultantly, they gained confidence and control, and wearied the visitors, whose pressing became a bit too headless chicken at times. After a goal kick was sent upfield for Cacau to flick on to Harnik, Leverkusen used the space temporarily available down the left. Michal Kadlec was located on his way to the byline, Khalid Boulahrouz neither covered the angle or smothered the runner, and the subsequent mid-height cross found the brilliantly timed run of Castro, who headed in from his own parried first-time volley for 2-1. 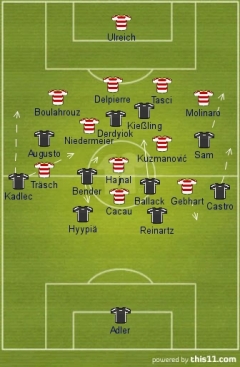 The formations in the 75th minute with the score at 2-2.

It didn’t take Stuttgart long to get back into things in the second half, however. Benefiting from an injury to Kießling which quashed some early tempo from the home side, Zdravko Kuzmanović slotted in for 2-2 from a Molinaro pass. Moments later, Okazaki cut in from the left, and drove a right-footed strike across goal, so nearly making it 2-3. Heynckes turned to his bench in response, replacing Daniel Schwaab with Derdiyok. Despite keeping the 4-2-3-1, he put the Swiss striker in the attacking hole, thus ensuring Kießling had what was now effectively a striking partner. But the momentum, intent and urgency remained with the away side, and Cacau so nearly made it 3-2 in the 60th minute. Leverkusen’s narrow back four backed off (scared by the two widemen cutting inside from the respective box joints), and the Brazilian-born striker crashed a right-footer off the post.

Not satisfied, Heynckes turned to his bench yet again a few minutes later, replacing both centre-midfielders with Ballack and Lars Bender. Rolfes had been shackled all game, and unable to pick out penetrating passes from the quarterback position. Arturo Vidal, meanwhile, had been unusually quiet. Ballack slotted in behind the box-to-box Bender, although the former Chelsea man occasionally ghosted in behind the strikers. However it was Kadlec who was growing in influence – the full-back making overlapping runs, diagonal darts to the D, and playing neat little one-twos as Stuttgart got deeper and deeper. Labbadia had made a change of his own by this point too, replacing the tiring Okazaki with Timo Gebhart, seemingly trying to fully nullify the increasingly fading Sam, and offer some fresh impetus for his side – who were knocking on Adler’s door.

However, Labbadia made a game-changing tactical error in the 75th minute. Although Harnik was fading in influence, Labbadia took the decision to settle for a point in replacing him with the side’s usual centre-back, Georg Niedermeier. Christian Träsch went out to the right flank, Niedermeier to defensive midfield, and in a top-heavy, full-back surging 4-4-2, Leverkusen flew forward. Winning a corner on the right, Castro’s 81st minute right-footed outswinger was inch-perfect, and met by a great leap from Stefan Reinartz. 3-2!

The young tactician, desperate to get something at a ground where he until recently ruled the home dressing room, had to turn to his bench again in a bid to alter things, replacing Hajnal with Schipplock. The striker played off Cacau, and with Gebhart pushed higher and infield, Stuttgart chased the game in what roughly resembled a 4-3-2-1. Alas, with a minute left on the clock, they shot themselves in the foot with an underhit set-piece. Sam took the loose ball, zoomed past three players with no one in support, twisted, turned, and eventually squared for the arriving Kießling to poke past Ulreich for 4-2.