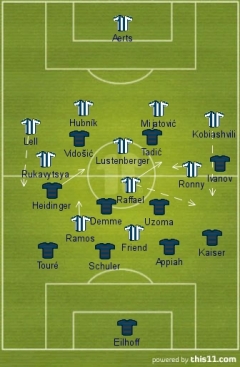 Hertha Berlin comfortably beat Arminia Bieleffeld to notch up their 13th win of what so far has been a very professionally conducted 2. Bundesliga campaign. The home side created a nervy last few minutes for their guests when Josip Tadić scored in the 85th minute after their first incisive through-ball of the match ( courtesy of Christian Müller). But the away side fully deserved the win, and now go into next week’s derby against Union statistically on top of the league, and metaphorically on top of the world.

In February 2009, Hertha had the chance to top the Bundesliga if they won away at bottom-placed Arminia. But the visitors were held to a draw by the plucky hosts, and their title challenge disintegrated not long after. In a form of déjà vu, the sides met again nearly two years to the day, placed at polar opposite ends of the table – Ewald Lienen’s side cut adrift, bottom of the table with a mere eight points, and Markus Babbel’s Hertha top of the table. The only difference being this time, the teams are competing in the second tier of German football.

Hertha took control of proceedings immediately in this game by pressing the ball higher up the pitch, and taking the sting out of early Arminia energy by patiently giving everyone a touch of the ball, and keeping the home side at bay. Going forward, Babbel’s side – playing with a midfield diamond – had the hustle and bustle of the Colombian Andy Carroll, Adrián Ramos, the left-wing-veering playmaker Raffael, and interchanging wide-midfielders and full-backs. The home side were only willing to press the ball in their own half, but despite them doing this in packs, Hertha’s intelligent and confidence use of the ball was wearing the chasers down. Although they weren’t able to use their possession to penetrate a deep defence, Hertha oozed control. On a bumpy and pothole-ridden pitch, Bielefeld couldn’t get comfortable on the ball, and gave it away all over the pitch with every second – attempted – touch a foul.

With all their sharpest moves being broken down by tactical or desperate fouling, the visitors were restricted to set-piece chances. But the home side’s man-marking system was comfortable dealing with all balls into the box, and given the panic induced by any runs Hertha made with the ball, it made sense for Lienen’s side to keep up with these cynical tactics. On the rare occasion Arminia countered off a Hertha set-piece, more of their limitations in the final-third were shown by a total lack of movement.

Growing frustrated by the ease with which Hertha were knocking the ball out, Lienen began screaming at his defence to push higher and limit the options Hertha had when it came to making the killer pass. But in the 17th minute, the entrenched defence got their wires cross. They half-heartedly stumbled forward in supposed unison, thereby giving Ramos time and space to assess how best to finish a chance one-on-one with the ‘keeper. But the Hertha attacker opted for a dive after trying to step by the oncoming Dennis Eilhoff, and wasted the opening. But Arminia were off the hook for a mere minute. The same push forward/stay deep conundrum resulted in exactly the same problem, giving Hertha the space with which to attack the home side’s goal, and after Rob Friend’s superb flick released Ronny’s unseen sprint (the Brazilian now playing on the right after switching flanks with Nikita Rukavytsya), Raffael’s powerful, pacy brother took the ball on and calmly steered it into the left-hand corner under Eilhoff.

After the goal, Arminia did half-heartedly begin pressing the ball higher up the pitch with a three-pronged forward line (Sebastian Heidinger tucking in). Although this forced earlier and scruffier passes from Hertha, Arminia’s ball-winners still looked overwhelmed – giving the ball away when they had it, unable to interpret the movement of the canny Hertha attackers, and offering no shield to their defence whatsoever. If ever anyone doubted the importance of having a decent ball-winner in a side, Fabian Lustenberger epitomised just how important such a player is. At the centre of the only area where Bielefeld were applying fierce pressure on the ball, Lustenberger kept a cool head, a tidy pair of feet, and by drawing men across, allowed Hertha to keep their full-backs flying forward into space on the overlap.

In the 39th minute, Raffael deservedly added to Hertha’s tally. The 25-year-old, reminiscent of compatriot Diego in the way he plays, was the beneficiary of some good work by Ramos and yet more awful defending by Bielefeld. After losing the ball a third of the way up the pitch, the home side’s midfield made tame efforts to claw it back from the poaching Ramos’s grasp. After just about pinching it away from his feet, the ball trickled to Raffael, under no pressure in the D with the defence yet again deciding it made sense to drop as deep as possible whenever they were run at. The ball was placed into the bottom right-hand corner by the former FC Zürich man, swerving and changing course on its way due to the bobbles on the pitch (defects that caused Hertha custodian Maikel Aerts one or two problems at the other end).

His side could have added two more before the interval – more sloppy attempts at passing to a teammate saw Rukavytsya burst forward with the goal gaping at his mercy, but Eilhoff made himself big and hurried the Australian’s effort. Then, the Brazilian brothers linked up cleverly from a corner – Raffael scooping it to the D (after every Hertha player in the box ran towards the near post and draged their man-marker along with them), and Ronny’s volley nearly sneaking in through the crowd.

Lienen took action at the interval – hauling off the woeful Diego Demme and ineffective Heidinger for fellow midfielder and former Hertha man Christian Müller, and Germany U20 striker Collin Quane. Although Arminia now had more presence in attack (thus increasing the likelihood of someone moving into good space when a colleague carried the ball forward), Babbel scrapped the diamond, flattened his midfield four (with Ronny now back on the left), pulled Ramos back whenever a thicker wall was needed, and had Friend putting in more running up top than he’d done in the first half. Resultantly, something of a stalemate ensued; both sides having several half-chances (more so Hertha than Bielefeld). But there was more of a purpose to the home side’s play now, and with Hertha gradually accepting that a two-goal margin was enough, Arminia were getting shots off from in and around the box.

But Friend and Ramos are a handful for most defences at this level, and the league’s bottom side often saw any momentum they’d built up quashed when Hertha got the ball for one of their frontmen to hold up, or draw a foul. Added to that, there was now counter-attacking space for the technically more gifted visitors, who used their pace and agility to carve chances, and pull the home side back. Credit must also go to Hertha’s players in the defensive phases of play. They kept the man on the ball under relentless pressure, and restricted Arminia’s attempts at releasing a full-back on an overlap, or making runs down the middle (towards, primarily, yellow-carded captain Andre Mijatović). Raffael wrapped up the points in the 76th minute, skipping on to a through-ball after using Rob Friend’s clever manipulation of the offside trap which distracted the Arminia rearguard. If players such as the Brazilian and Canadian can maintain their fitness and form, Hertha will almost certainly be back amongst the elite next season.