The formations that started the game. 4-4-2 vs 4-4-2 = barely a shot at goal, a bitty match with players fouling persistently due to being on top of one another, and an inevitable first half stalemate.

Matchday 21 of the Russian Premier League’s 2010 season saw ninth-placed Anzhi Makhachkala meet a Rubin Kazan side on the warpath after a midweek loss in the Champions League to Copenhagen.

Russia’s 2008 and 2009 champions made four alterations to the team that lost in Denmark, with Salvatore Bocchetti, Carlos Eduardo, Lasha Salukvadze and Vitali Kaleshin either rested, injured or dropped.

Anzhi made a few changes to the side that lost at Rostov last week, though most crucially, their passionate Dagestani fans were deprived of Jan Holenda, Andrei Streltsov and Igor Strelkov.

The match started in a frenetic fashion as both sides kept the ball in the air. This theme characterised the entire game as both sides opted to send goal-kicks towards and often into the opposition’s box.

While Rubin stood their defence on the halfway line during birthday boy Sergei Rhyzhikov’s long kicks of the ball, Anzhi kept banks of ‘4’ and ‘3’ deep in narrow, eyebrow shapes.

Such a defensive tone was the reason Anzhi struggled in the final third of the pitch throughout this match. Although they had all of the chances in the opening 45 minutes, most were pot-shots, hit more in hope than anything.

The technical level of the home side’s players wasn’t great, and due to the insistence on keeping bodies deep, having to hold the ball up and wait for others to join the attack proved momentum-stifling for the strikers.

Anzhi panicked when forced to play passes, yet some did inexplicably nearly lead to openings – César Navas might be quick along the ground, but his efforts to step forward onto incoming passes and intercept them became more casual as the game wore on, and allowed Anzhi to occasionally create chances by nicking the ball off the dithering Spaniard.

One such instance of this happened seconds before the break. Navas was seemingly standing his ground for a change, when the until-then clumsy Ali Kébé cleverly played in former Rubin striker Ilya Kukharchuk.

Navas was alert to both the pass and presence of the opposition attacker, and positioned himself suitably. However, like his colleagues, Kukharchuk refused to give up, and dispossessed the stunned Spaniard.

Kukharchuk lurked deeper than David Tsorayev in a bid to either flick-on for or pass the ball to Anzhi’s classy talisman. But despite Cristian Ansaldi offering little in attack, he was decisive in the tackle throughout, stopping Tsorayev in his desire to take the ball down the right channel.

Nevertheless, Anzhi’s best chance of the entire game did actually come from Ansaldi’s side: starting when one of the centre-backs, Orekhov, nodded off, failing to cover the gap. Kukharchuk chased Kamil Agalarov’s seemingly lost through-ball, and carrying it goalwards, ended up shaving the post with a shot on the turn.

This illustrated something Anzhi did very well throughout, pressuring of the man on the ball. Nicolae Josan andAgalarov worked hard at helping their full-backs quash the wing-changing threats of Alan Kasaev and Andrei Gorbanets, keeping them relatively quiet.

The former seemed particularly motivated, however, and was tucking inside to swamp Anzhi’s attempted long-ball knock-downs, as well as using this central area when in possession to instigate.

However, Rubin already had a plethora of deep and willing creators – Rafał Murawski, Ansaldi and Christian Noboa, who all fancied themselves in the role.

Further up the pitch, Sergei Kornilenko and Obafemi Martins were both mobile and hungry, but there was no sign of any understanding between the pair: the Anzhi defence barely shed a drop of sweat between them in stopping the not-so deadly duo.

Potential chances from set-pieces were thin on the ground for both teams – right-footers and left-footers all had a crack, but both the short one-two moves and low inswingers were comfortably guarded.

Martins and Gorbanets were hauled off at the interval as Gurban Berdiýew altered his system, seeking to prise apart the two solid walls formed by Gadzhi Gadzhiev’s side.

4-4-2 became 4-2-3-1, but this just invited the Anzhi attack into the game. A similarly fast-paced start to the game’s second half was characterised by more hard-work, more long balls, yet only Kébé testing a ‘keeper.

Net-tenders Rhyzhikov and Abayev joined in the quick tempo, the space available because of the direct tactics meaning both had jobs to do as sweepers. The latter had to be especially alert as Aleksei Medvedev was playing in a style reminiscent of Pippo Inzaghi, looking to get on the end of the balls over the top before the ‘keeper. 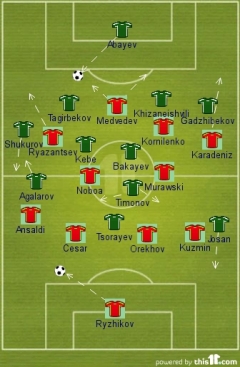 The 4-2-3-1 formations both sides used in the second half. Presumably Rubin kept their full-backs guarded so the centre-backs could continue snuffing out the balls over the top as soon as possible.

The pace of the game never dropped, and gradually, the wingers started to get the ball down and run at the full-backs. Kasaev in particular was now working more on the left than in the centre as he sought to expose the gap often abandoned by Mahir Shukurov. Gökdeniz Karadeni did the same sort of job on the right.

Unfortunately for the visitors, 22-year-old Agalarov was highly disciplined and covered his right-back’s post when required with unselfish discipline. Josan was equally attentive to his defensive duties, and he also caused Oleg Kuzmin no end of problems throughout the second half in his primary attacking berth.

The reason Rubin really needed to attack the full-backs was because Mikhail Bakayev was doing as superb a mopping-up job as Murawski was in their own midfield.

As the hour mark came and went , the flames of the encounter began to die – Noboa and Tagirbekov gloriously wasting good free-kick opportunities that may have kept the encounter alive.

Berdiýew had no intention of unleashing his full-backs on the attack – the overlaps of whom are normally so vital in a 4-2-3-1. Their best chance came with two minutes to go when a corner at last beat the first man, but Noboa misdirected his header.

But as injury time commenced, Kébé committed a stupid foul just outside of the D. Karadeniz and Ansaldi stood over the free-kick, and the Turk curled it sweetly and decisively into the bottom-left corner! The goal was the epitome of that footballing cliché about a smash and grab raid.

The win moves Rubin Kazan to within three points of Zenit at the top, and seven points clear of third-placed CSKA. Both CSKA and Zenit have three games in hand, however, starting with Terek Grozny and Sibir Novosibirsk respectively tomorrow.