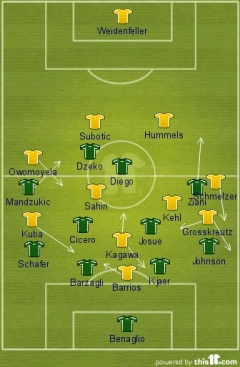 Another pulsating weekend of football action in EU member states has been and gone, and all we can do is reflect and hope next Saturday and Sunday are just as action-packed.

I began my weekend with two successive 2-0 triumphs – Hoffenheim’s conquest of Schalke on Friday evening, followed by Zenit’s cruise to victory over the downwardly-hurtling Tom Tomsk.

Subsequent to that interjection of Russian action, I found myself back in the realms of the Bundesliga as Jurgen Klopp’s Borussia Dortmund sought to inflict a third successive defeat on Wolfsburg.

After an embarrassingly lacklustre first-half against Bayern Munich on the season’s opening day (during which Wolfsburg were allergic to the ball or their opponent’s half), positive tactics in the second half at last gave Wolfsburg some identity. END_OF_DOCUMENT_TOKEN_TO_BE_REPLACED