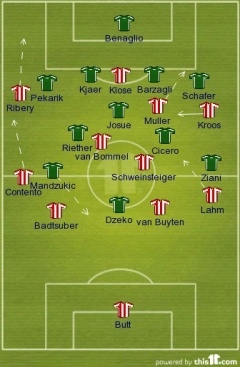 Germany’s top-flight didn’t provide any real jaw-dropping scorelines this weekend, but then such is the competitive nature of the Bundesliga and its competitors, rarely do its matches genuinely shock.

What the division does do though is continually excite, and it’s a joy to have it back on the box in Britain. The season started on Friday evening at the Allianz Arena, with 2009/10 champions Bayern Munich hosting 2008/09 champions, Wolfsburg.

Blogs including this one spent hours writing on and pondering over the system McClaren would commence life in the Bundesliga with, so it was a relief to finally see what the former England national team coach had up his sleeve.

I, for one, was totally out with my predictions on what he’d do. Although the dourness of Twente still permeated McClaren’s latest employers in their first competitive game, it was without the ball instead of with it.

The Englishman set out to stifle the swashbuckling Bavarians, and might even have succeeded were it not for a stupendously wonderful Toni Kroos-carved Thomas Müller goal.

Prior and subsequent to going a goal down, the visitors’ ineptness was surmised by the sulky demeanour of Edin Džeko. It was clear the Wolfsburg players felt straitjacketed, and rarely did Mario Mandžukić get near the Bosnian.

However, credit to the former Middlesbrough manager for radically amending things at the interval. On came Zvjezdan Misimović for the beleaguered Peter Pekarik, who had been ravaged by the directness and potency of Franck Ribéry and Diego Contento.

Bayern, so accomplished on the ball and allowed to monopolise it, enjoyed the extended spells of possession the first half brought, and Louis van Gaal’s players oozed the assuredness and confidence of 2009/10.

However, Misimović changed the game and turned the tide in Wolfsburg’s favour after coming on. At last, McClaren allowed a player to actively seek the ball, and Džeko had a colleague nearby.

Running at Bayern’s notoriously dodgy central-defence, it was little surprise that the forthright cleverness of the Bosnian trequartista’s through-balls began to induce panic, and render Džeko deadly.

The equalizer was inevitable, and Bayern’s injury-time winner something of a sickener. Bastian Schweinsteiger’s back post peel was masterful, but Diego Benaglio found himself in No Man’s Land. 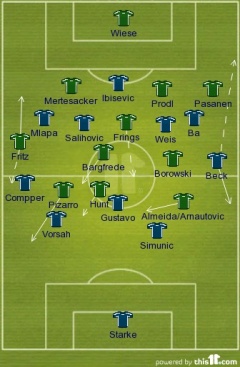 Next on my German agenda over the weekend was Hoffenheim’s 4-1 hammering of Werder Bremen. Bremen took the lead almost instantaneously, Torsten Frings making no mistake after the visitors won a cheap spot-kick.

Hoffenheim rallied and their quickfire quadruple was deserved. Thomas Schaaf, so regularly eulogised for his ambitious attacking intentions, must take a hefty chunk of the blame, however.

A topsy-turvy week saw the talismanic Mesut Özil depart, and Bremen beat Sampdoria 3-1 in a Champions League play-off. Naturally, Schaaf sought to compensate for tired legs, and set his side out cautiously.

The lack of width was embarrassingly apparent, although Clement Fritz kept Marvin Compper pinned back. Claudio Pizarro, meanwhile, also sought to add width on the right; charging out there and drawing Isaac Vorsah into clumsy bundles.

But Ralf Rangnick cleverly deployed two pacy forwards on the midfield wings to counter this, thus ensuring Vedad Ibišević was never isolated, and allowing his team to boss the midfield: Brazilian Luiz Gustavo pulling the strings.

With no one to guard against on his flank, Andreas Beck spent the game in Bremen’s half. Poor old Petri Pasanen – Tobias Weis and Beck were phenomenal, as potent a pairing as one could wish for.

Despite the left side of Hoffenheim causing Schaaf a permanent headache, other areas of the pitch were exploited to beef up the home side’s goal-tally.

As ever, Bremen sought to push their defensive line up the pitch. Unsurprisingly, Per Mertesacker’s lack of pace was therefore asking to be exposed.

Similarly, Fritz’s gusto for playing as an auxiliary winger allowed Mlapa to creep ever higher and stay closer to Vedad Ibišević. Likewise, Salihović had little pockets in which to spray passes, or feed overlaps. 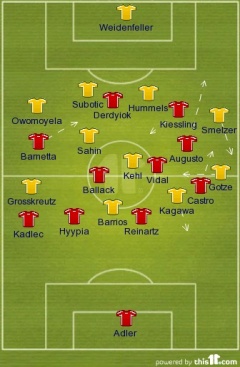 It looks like being a case of different season, same problems for Jurgen Klopp’s Borussia Dortmund. Jupp Heycknes’s counter-attacking 4-4-2 offered his young counterpart a tactical lesson, and ensured his Leverkusen team won 2-0.

As ever, the home side’s centre backs began with cynical melina, before feeding quarterback Nuri Şahin, or letting Mats Hummels pick out a long-diagonal.

Over on the other side, Leverkusen knew Mario Götze wanted to cut in on his right foot, and deployed the necessary overzealous pressure in order to halt these bids.

With Gonzalo Castro given license to advance (Marcel Schmelzer doesn’t always retreat that hastily), Leverkusen’s right side became their most vital attacking region.

Bizarrely, Klopp had his centre backs man-mark Heynckes’s strikers, and their clever movement allowed the likes of Tranquillo Barnetta and Renato Augusto to veer towards the D.

The interchangeability on the right was most notable, and even when the Stefan Kießling/Augusto/Castro triumvirate failed to concoct something, the in-your-face off-ball hounding led by Arturo Vidal prevented Dortmund from breaking.

Ultimately though, the disciplined banks of 4-4-2 that Leverkusen maintained against the melina kept the Dortmund pace pedestrian, helping the visitors to gain and hold the lead with comfort. 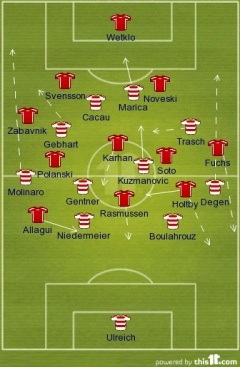 Last but not least, I squeezed in Mainz against Stuttgart. Unsurprisingly, Thomas Tuchel has maintained the ridiculously energetic mantra of off-ball pressing, although credit to Christian Gross for keeping his side out of their collective shell.

Stuttgart’s full backs were explosive and deadly throughout. Despite the fact that a lack of width never really hindered Mainz, the full backs and wingers of the away team linked superbly and at great pace, taking the game to the hosts.

Yet despite Mainz being as scruffy as ever, their all-action style was complemented by the deadly delivery of an overlapping left back (Christian Fuchs), and the vision of Lewis Holtby.

Christian Träsch was Gross’s most impressive player, crisp and clever in the pass, and always on the move. Cacau disappointed though, spending too much time away from the box, and thereby ensuring crosses went astray.

Two defensive errors decided this relatively even tie, one in either half. Holtby’s through-ball to Sami Allagui’s canny and deceptive dart was perfectly weighted, but the defence was high and split.

Mainz’s second again saw Khalid Boulahrouz at fault, although Sven Ulreich creeping off his line allowed a speculative and loopy Morten Rasmussen header to float into the net.