As a fan of the Russian Premier League, I’ve grown accustomed to watching the 29-year-old in action. His versatility and volatility always make for entertaining viewing, and he’ll offer Roberto Di Matteo fresh attacking impetus.

Recently, Odemwingie has found no luck at club or international level. At World Cup 2010, Nigeria floundered, while Loko’s recent form domestically has been laughable.

In Russia, the Uzbekistan-born forward has spent 2010 positioned in various points of Yuri Semin’s 4-2-3-1. However, he’s at his best on the right flank as this favours his right foot.

Against Chelsea on the opening day of the Premier League season, West Brom flitted between a 4-4-1-1 and 4-2-3-1, their midfield wide berths being occupied by two right-footers.

Therefore, it would appear that Odemwingie hasn’t necessarily been brought in to provide a fresh wide midfield option – something Di Matteo has stated in public: “We’ve brought him in as a striker,” he said at the press conference arranged after the striker’s arrival.

However, perhaps West Brom didn’t send their scouts to the most recent game Odemwingie played as a central striker. Away at Samara in the Russian league, the Nigerian’s constant drifts back into the midfield left the Railroaders shorn of a focal point.

Although this occasionally allowed him to carry the ball goalwards, the lack of a passing option was noticeable given the fact he was meant to be the one located upfield by his colleagues! 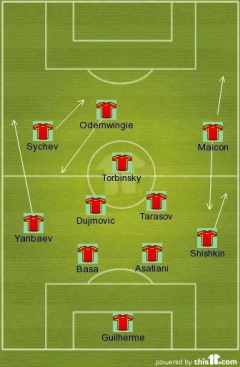 Correspondingly, his decision-making on the ball was atrocious. The imminent Premier League move probably influenced his selfishness; if that in any way excuses ignoring feeding options in order to miscue speculative shots.

Nevertheless, his characteristic hunger was resplendent, and Odemwingie is more than willing to do his share of ball-winning for the team.

Be that as it may, winning the ball deep in central midfield doesn’t gloss over the fact such tactical indiscipline renders the robbing ineffective.

Despite Samara holding the Moscow outfit 0-0, Odemwingie engineered his side’s best chance. His quick dart at the box turned a simple throw from the left into a through ball, panicking opposition defender Aleksandr Belozyorov into tugging the incoming Nigerian to the floor.

It’s a shame such moments of canny forward play were few and far between. Other notable – albeit fleeting – assets Odemwingie brought to leading the line that day included ball-holding strength, and clever reverse flicks for Renat Yanbaev’s overlaps.

Alas, that miserable match was his last appearance in the red of Loko. Selecting Odemwingie in this position was an odd choice, so coach Yuri Semin must shoulder some of the blame as his team have looked better with Sychev or Traore up top, and Odemwingie and Maicon out wide.

In the 1-1 draw at CSKA Moscow earlier on in the season, Maicon and Odemwingie’s constant switching between the right and left sides was highly penetrative, and Odemwingie was oozing confidence as a traditional winger – teasing, tenacious and cute.

Being nominally stationed on the chalk also allows Odemwingie to disguise his runs into the box, interchanging with the lone striker.

In round one’s match at Rubin Kazan, he did this from the right wing; by round four, he was doing it from the left. During the latter game, Dynamo Moscow’s Kirill Kombarov was pegged back to stop him as an act of caution.

Fascinatingly, Odemwingie featured in an alternative position for Nigeria at the recent World Cup. After starting on the bench for the Argentina game, a late cameo earned him a start against Greece.

Against the recent European champions, the multilingual – Dutch, English, Portuguese, Spanish, Russian and French! – former Lille-forward played as a support striker to Yakubu.

Thrown on versus Diego Maradona’s side, who lead 1-0, Odemwingie instantly pounced on the space tiring legs and cautious South American stick or twist tactics offered.

Immediately jogging away from the board-holding fourth-official who allowed him to enter the field, the substitute received a throw deep in his own half, sold two shacklers a dummy, and instantly curled a ball for Yakubu to compete with the ropey backline for.

The boy christened Osazemwinde got up and down the left strip of chalk heroically throughout the rest of that appearance against the Argentines – mimicking the support Kala Uche gave on the right, and surging back to dispossess Jonás Gutiérrez and Lionel Messi whenever required.

Arguably, Odemwingie should have levelled the scores. Fed one-on-one, the Russian ice hockey fan tried one too many strokes of the balls and shoulder-drops, thereby inviting a last-ditch tackle.

Swedish coach Lars Lagerbäck was obviously pleased mind, hence including him from the off in that do-or-die encounter with Greece. Alas, Nigeria’s negative and misinterpreted tactics nullified Odemwingie, rendering his inclusion futile.

Seemingly set out in a 4-4-1-1, the coach’s right-sided midfielder was ostensibly Sani Kaita. But the Alania Vladikavkaz player is a centre midfielder, and tended to gravitate towards that region.

This was semi-understandable on his part – Greece started with great purpose and dominated proceedings via a pioneering 3-4-2-1 system that catered for a panic-inducing command of the centre.

Thus, Odemwingie was dragged back to his own half, and stationed in front of Chidi Odiah. To stifle this rampant European momentum, Nigeria parked two buses on top of their ‘keeper, isolating Yakubu.

The supposed second striker was uncomfortable in this dual role, and often drifted aimlessly between several areas of the pitch, caught in two minds. When Kaita got himself sent off, the right-sided role became permanent for West Brom’s new buy thereafter.

Nevertheless, the Premier League’s latest import played his part in the surprise lead the Super Eagles took. His distracting dart in front of the Greek ‘keeper Alexandros Tzorvas allowed a harmless free-kick to bobble in.

One thought on “Peter Odemwingie”