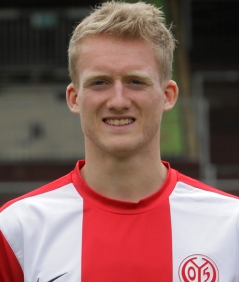 Last season may have been a resounding success for Die Nullfünfer, but forecasting such an achievement before a ball was kicked would have you seen sectioned.

Entering the Bundesliga from its feeder division with the lowest wage bill and a meagre 20,000-seater stadium, the board hurled even more obstacles in the team’s path by firing coach Jørn Andersen.

Either foreknowledged beyond the realms of other mere mortals, or, taking the cheap option, U19 coach Thomas Tuchel was handed the reigns on the season’s eve.

This gave Mainz another awkward looking record – the league’s youngest coach. Yet to be fair to the directors, they backed the 36-year-old to the hilt, and boy did it pay off.

Tuchel delivered Mainz’s highest ever points tally and placing (even more impressive considering that with safety secured, they switched off for the last two months), plus memorable wins against the likes of Bayern Munich and Borussia Dortmund.

He has since been rewarded with an extended contract, taking his tenure through to 2013. Change has hardly been major personnel-wise, but one or two comings and goings will influence what 2010/11 has in store.

Importantly, Aristide Bancé looks set to be staying with the club. The Burkina Faso striker, whose exclusion from the African Cup of Nations squad last January helped his club’s domestic cause  immeasurably, must prove he’s no flash in the pan this time round.

His 10 goals were pivotal to a side that netted just 36 times, and he excites fans with his insistence on running at defenders, or shooting thunderously from range.

Bancé’s free-kicks, always over-struck, were poor, but it was he who tended to win them. The Burkinabè is more just than a sharp-shooter therefore, as his targetman credentials give the team another weapon.

His deputy was a Real Madrid loanee, Ádám Szalai. He impressed in flashes, and scored the quite superb skill-lavished goal that saw Mainz beat Borussia Dortmund.

Szalai has now been saved from obscurity in Spain, joining his adopted club on a three-year deal. Nevertheless, with Felix Borja, the league’s first ever Ecuadorian, joining Augsburg, Mainz appear to lack depth up front.

Lucky then that Tuchel is a staunch 4-2-3-1 man. His is an attacking take on the system, with furious defensive midfield biters flanking two wingers and a playmaker.

The side’s hief creator is Andreas Ivanschitz, now in the final year of a two-season loan from Panathinaikos.

His application off-ball can at times be overzealous, but six goals and seven assists from 27 games epitomises his through-ball making, placed-finishing talents.

Most interesting though is the departure of Chadli Amri. Stationed on the left flank, Amri made as many defence-splicing passes as Ivanschitz, and the Algerian-Austrian duo interchanged effectively. 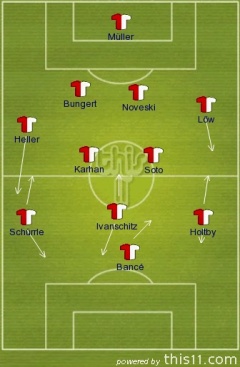 Haruna Babangida, 27, has joined to add versatility in all areas of the final third. He’ll be an impact player rather than a starter (a lá Jan Šimák), but it remains to be seen whether he’s of the necessary quality.

Lewis Holtby, however, is definitely replete with quality. After an impressive latter-season spell with Bochum (and having destroyed Mainz for Schalke during the pair’s game early in 2009/10), the young left-sider arrives on a season-long loan.

This is fantastic new for Die Nullfünfer, and one sure to keep Mainz punching above their weight. As for filling Hoogland’s vacancy, the answer lay in the squad already…

André Schürrle, capable on either wing, finished the season as one of the league’s stand-out players. The 19-year-old boasts pace, a thunderous strike, and the ability to play the killer pass.

He’ll get more opportunities this season, flanked by ever-impressive wing back Florian Heller. If Schürrle picks up where he left off, the European giant vultures will spend next summer drooling, circling, and pouncing.

The acquisition of left back Christian Fuchs doesn’t bode well for Radoslav Zabavnik or Zsolt Lőw. The pair might be saved by the fact the Austrian is weaker in open play than he is from his trademark free-kick and corners, however.

Mainz have a tough start to the season, with Werder Bremen, Wolfsburg, Bayern Munich, and Stuttgart comprising four of their first six matches.

However, their final six fixtures look less taxing, and could be pivotal should the season descend into a safety scrap.