Followers of thermal-clad football rejoice – Russia’s Premier League resumes in full after its break this Thursday!

In spite of bidding to host its 2018 edition, Eastern Europe’s stellar division is ignoring the ongoing World Cup.

The RFUs calendar runs from March to December, and deprivation of fatigued South Africa-starring personnel could therefore impact on the eventual standings.

Overtaking leaders Zenit St. Petersburg side is a primary mission for at least five clubs during the second half of the season, with the recent UEFA Cup champions by far and away the league’s best side. 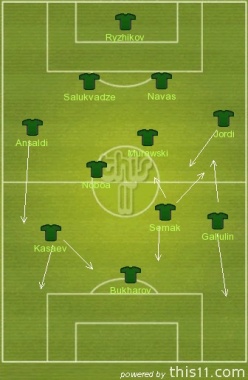 Rubin Kazan, circa-2010. Fatih Tekke can come in as support striker, and plays like Carlos Tevez. Ansaldi is equally capable at left back, and it's normally he who brings the ball from the back. Alan Kasaev takes on the playmaking and high pressing duties, reminiscent of Wesley Sneijder

Achieving the former has yet to begin, but an upholding of Tatarstani domestic dominance now looks unlikely.

Nine goals in 11 games sees Rubínovye languish in third place. Comparatively, they were league top scorers in 2009, with 62 in 30 matches.

The problem is obvious – a paucity of Alejandro Domínguez, the talismanic Argentine creator and scorer who joined Valencia.

The former plays with a sense of weary resignation, while Bukharov spends his time diving, and needlessly chasing back.

Rubin’s goal threat remains set-pieces: Jordi’s long hurls, the wicked corners of Pyotr Bystrov, or the crossed free-kicks of Noboa. The Ecuadorian’s shooting of dead-balls has been notably weak, however.

Conceding goals isn’t a problem, at least. Three have been shipped so far, though the defence isn’t intimidatingly tight – this non-concession stems mainly from tactically negative opponents.

The club’s weather-beaten, potholed pitch remains burdensome, and prevents the simplest of passes. Unless tended to, Rubin Kazan’s form will remain poor. 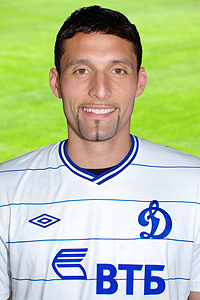 Dynamo Moscow boast exciting midfield ball-players in Igor Semshov and Aleksandr Samedov, yet neither has sparked resuscitation of the club’s long-lost fortunes.

The side’s defence is vulnerable, and Aleksandr Kokorin hasn’t convinced up front: last season’s measly team tally of 31 goals has looked like being replicated, if not *bettered*.

Slumped in ninth place on 14 points (13 behind Zenit after the leaders won their game in hand), a podium finish appears unrealistic.

Nevertheless, Kuranyi’s goal-threat, compounded with the recent appointment of Miodrag Božović, indicates that all may not be lost. 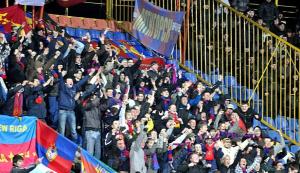 Correspondingly, CSKA haven’t adapted to their top-heavy system in which the three central playmakers gravitate towards the centre.

The side’s league form has also been affected by (2009/10) Champions League involvement – 390 draining minutes against Seville, and eventual victors Internazionale.

African adventurers Odiah, Krasić, and Honda will be used sparingly until August, though conveniently, the Armeytsy (‘Army Men’) face Saturn and Samara in Rounds 12 and 13.

The Serbian right winger Krasić’s immediate future is shrouded in mystery, but CSKA have reinforced and replaced within the squad strongly.

Zoran Tošić is the Nedved lookalike’s understudy at international level, and arrives fresh from bamboozling Bundesliga full backs with his stepovers and thunderous strikes.

Fresh blood has also been pumped into the striking department in the shape of Switzerland’s top goal-getter, Seydou Doumbia.

His arrival is bad news for the overly-casual Tomáš Necid, especially with Guilherme being one of the league’s most in-form players lately.

CSKA sit in second place, are the league’s top-scorers (having netted six more than Zenit), yet agonizingly, lost 2-0 at home to the St. Petersburg side.

Despite that overpowering arsenal of talent, Leonid Slutsky’s side were guilty of playing too many long balls against their ruthless rivals, hence how they lost.

Lokomotiv Moscow boast the league’s outstanding player in Oleksandr Aliyev. Lethal set-pieces and long-rangers mean a goal-of-the-season competition could feature the Ukrainian on his own!

Alas, he’s the leading light in a team of smashed bulbs. The plodding others are workmanlike, and Brazilian goalkeeper Guilherme is calamitous.

The Railwaymen, yet to win away from the Lokomotiv Stadium, sit in 8th spot – filling to the bread-slices of Dynamo and Spartak.

Ahh, Spartak Moscow. Last season’s runners-up need to improve on the road, and pronto, because their participation in the Champions League begins as the domestic season concludes.

In Alex, Myaso (‘Meat’) boast a  playmaker capable of the spectacular. Some of the Brazilian’s passing enabled compatriot Welliton to finish with the 2009 golden boot.

The 23-year-old Welliton, agile, quick, and clever, is complemented by a third Brazilian, Ari. The energetic acquisition from AZ Alkmaar is a perfect foil for the workings of his side’s more celebrated South Americans.

Although Spartak have a game in hand (a win in it would lift them up to 5th place), they’ve been hilariously inconsistent.

The puncture is in the centre of midfield – Renat Sabitov, Aleksandr Sheshukov and Ibson lack pace, pass precision and vision, and stifle the side’s momentum.

If not addressed, Spartak Moscow could face domestic and continental humiliation. 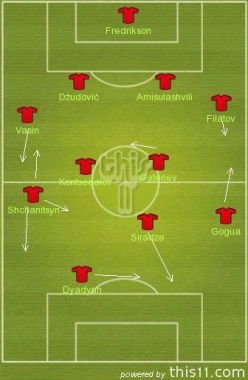 A typical Sparak Nalchik starting XI. They resume the season shorn of key centre back Aleksandr Amisulashvili, the Georgian having joined Turkish side Kayserispor. Left back Valentin Filatov is more cautious due to Gogua's high-lurking, Geteriev is the calm, Mikel John-Obi-esque midfield presence, while Brazilian Leandro can come in as a more attack minded right-sided midfielder if needs be.

For a short-lived period, Spartak Nalchik topped the standings. The Kabardino-Balkarian outfit succeeded via fusion of tactical discipline and stamina.

Crucial components to Yuri Krasnozhan’s team are Gogita Gogua, David Siradze and Vladimir Dyadyun – all of whom are a cocktail of energy, delivery, vision and positional sense.

A 3-1 loss at Zenit cooled Nalchik’s form, but their next three matches are winnable. The title? No. Europe? Maybe.

If Tom Tomsk continue their pre-break form, the Sergei Kornilenko-fuelled side know a Europa League spot is plausible.

Nobody enjoys visiting their Siberian cauldron, but so far, they’ve taken more points on the road.

Kornilenko, on loan from Zenit, leads the scoring charts with seven goals – a figure shared by Aliyev and Welliton.

Luciano Spalletti’s Zenit recommence the season with winnable ties against Alania and Sibir. They also now have the Russian Cup in the bag after defeating the former 1-0 in the final.

Unburdened by a European campaign, they’ll likely retain top spot until the end of the season. Hope, however, remains for the chasers, knowledged that winning a league is uncharted ground for the Italian.