Despite neglecting to play a recognised striker against Cameroon, Japan still managed to score the game’s only goal. Their African opponents, on the other hand, started with with a striking-trident, but lacked an incision.

The trio of attacking midfielders instead utilised by Okada were wonderfully dynamic and fluid.

Japan’s tactics dithered little from first whistle to last. If anything, Keisuke Honda’s goal was incidental, but unsurprisingly, it resulted from a rare occasion of Japan’s attackers venturing into Cameroon’s box.

His preferred right-footed cross corked, Daisuke Matsui stepped back, and crossed in on his left instead. This position shift enabled Yoshito Okubo and Honda to pile in, and the latter scored with Stéphane Mbia bizarrely electing to desert him at the crucial moment. 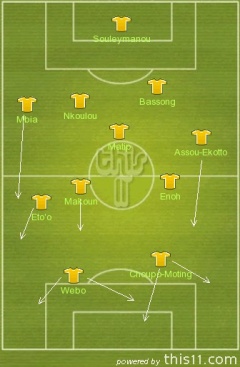 Cameroon’s only world class player, Samuel Eto’o, was anonymous throughout. Playing in a position that was a RCM/RM/AMR hybrid, the Inter man mainly delegated his responsibilities to Makoun and Mbia, who worked on the inside and outside right respectively.

Pierre Webo’s toil up top saw him hold the ball well, but with Cameroon fielding three players who are utilised as defensive midfielders at club level, a centre forward on the left wing, and the aforementioned lifeless superstar, vision and penetration were conspicuous only by their absence.

If anything, Paul Le Guen’s playmaker was his left back. Benoit Assou-Ekotto used the disciplined sitting and simple bridging of Joel Matip to bomb forward and bring the attack, playing sharp midfield-splicing floor passes and launching pass and moves.

Flanked by the comparably touch-gifted Eric Maxim Choupo-Moting (who played on the left, despite being a target man in the Bundesliga), Assou-Ekotto regularly troubled Yūichi Komano. Despite this, the Tottenham man’s set-pieces left a lot to be desired.

Perhaps surprisingly, if stereotypes about the stature of Asian men are to be believed, Japan were aerially dominant throughout, and as the game wore on, they camped in their own six-yard box. The two centre backs, often increased in number by Abe, superbly protected their line-deserting, flapping goalkeeper.

Cameroon played into Japan’s hands via persistent up and unders, unforced and forced, particularly with Honda prowling and hounding the African side’s defence with gusto.

A playmaking defender also represented Denmark in the earlier game against Holland, because with Bert van Maarwijk’s deadly duo of Wesley Sneijder and Rafael van der Vaart switching between the hole behind the striker and left wing positions, gaps emerged to carry the ball forward from deep. 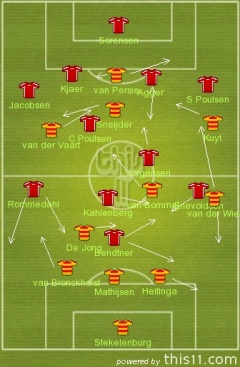 The niggly, gnashing Danes spent the most part of the game out of possession – thus, they were unable to penetrate the often exposed Dutch rearguard. But the constant bank maintaining and ball robbing did allow them to frustrate one of the tournament favourites.

Correspondingly, they man-marked each of Holland’s restarts, stymieing their rhythm by preventing short goal-kicks, and bossing the resultant hoofs.

In possession, Denmark drew affronted chases from the attacking midfielders, or overzealous fouls from the more defensive minded Dutch players.

Ultimately though, possession told. A peculiar own goal, and the introduction of an actual winger in Eljero Elia undid Morten Olsen’s troops.

As a result of these two results, Denmark versus Cameroon promises to be a feisty affair. And, unless Arjen Robben or Elia start against Japan, expect more of the same stodgy frustration from the Dutch.