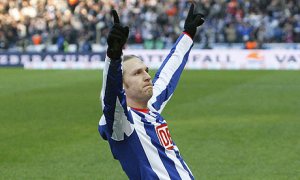 Christopher Towers wrote a piece on the Berliners for When Saturday Comes recently. In it, he refers to the team’s relegation in May as “remarkable”. In reality, it was anything but.

Die Alte Dame may have mounted a quasi-title challenge in 2008/09, but the foundations were hollow, the bid a bit of an anomaly.

Lucien Favre’s gameplan was built on a sit/suck/surge/shoot (repeat) style that made for 1-0 wins and frustrated football fans.

As Rangers, Greece, Fulham, Schalke and so on have shown in recent seasons, short-term spurts of success are easy to attain via these kind of tactics.

Inevitably, such flavours are played by *smaller* clubs, or, in the case of Schalke, Rangers, and Hertha, those with finances preventing extravagance. In the case of the latter, the capital-city side’s cobweb-ridden vaults meant that their personnel-crown jewels were sold over the summer – occasionally talismanic heroes such as Marko Pantelic, Andriy Voronin and Josip Šimunić. In spite of this, the club were still €35m in debt, and thus had no way of plugging the gaps.

Things got worse on and off the pitch as the season went on – perhaps worst of all, yobs rioting in the stadium after another home defeat. The relegation was prolonged until the penultimate weekend, but nigh-on certain from about September.

Putting the ball in the net was the side’s main problem. As defender Arne Friedrich observed:

If relegation was determined by periods of possession and spells of domination, Friedhelm Funkel’s flops would’ve been slumped on an EZ Boy in mid-table. 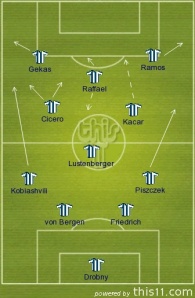 In spite of everything, I enjoyed watching the Berliners. Perhaps it emanated from the slapstick nature of the defending, or the desperate intensity which their squad fought with in each round of fixtures.

The magic of a certain South American was why they ultimately intrigued me – Raffael, a midfield genius; a player permanently blessed with time and space.

I expected the Brazilian to get poached before August, but he has surprisingly committed his future to the club until 2014 – absolutely tremendous news for everyone associated with Hertha BSC.

Each of the numerous chances squandered by Berlin’s corks up-top were created by the vision and accuracy of the former FC Zürich man.

If new coach Markus Babbel can uncover a goal-scorer (perhaps Adrián Ramos will be less profligate in the second tier?), then Berlin are odds-on favourites to walk 2. Bundesliga.

Nevertheless, as well as the debt, question marks also linger over the futures of talents such as Gojko Kačar, Fabian Lustenberger, and Łukasz Piszczek.

Correspondingly, question marks hangs over the coach too – under his command, Stuttgart were woeful in 2009/10.

Yet by keeping the goal-scoring/goal-creating wizard that is Raffael, Hertha BSC definitely have grounds for optimism in what might be a one-season stop in the second tier.